Postel opened his remarks by indicating the university’s progress on a number of issues, including the SACS accreditation process. SACS will conduct a site visit Sept. 19-21 to asses our current accreditation probationary status.

“I can tell you we’re ready. We’ve checked every box in a very meticulous way,” Postel said.

Exit interviews will be conducted on the last day of the site visit, Sept. 21, and Postel said we will have a reasonable idea of where we are with our accreditation at that time.

“This decision is of great concern to the university. Though it doesn’t apply to a lot of people, it is symbolic. We pride ourselves on being a diverse and welcoming campus and this threatens that,” he said. “We are taking this as a very serious concern and we intend to spend a lot of time talking to elected officials about finding a solution instead of just discontinuing the program, which I think would be a huge mistake.”

“Many of these affiliated buildings have non-students and a lot of crime is the byproduct of non-students. This will take a while because of leases, but one of the goals is to homogenize those dorms,” he said.

Postel also said the university is getting ready to launch a national search for a new police chief.

Postel transitioned to the donor community, which he said “continues to warm up to us.” Two major gifts are expected to be announced soon, as is a cardiac research project gift.

On the topic of the budget, UofL finished the fiscal year more than $20 million ahead this year, “a dramatic difference from the past two years.” He said this progress should bode well for the SACS visit.

UofL Hospital is “doing extremely well” since its transition to UMC this summer. In June, 85 nurses were hired and the hospital beds are full.

“This is a great problem to have,” Postel said.

Jewish Hospital and Frazier Rehab buildings are for sale. Postel said this is a concern since UofL has “major” programs housed in those buildings.

“The conversations are not going so great. It is possible there won’t be a buyer. We own the land and the buildings if the current operator leaves,” he said.

Postel said there will be more open forums in October to provide the university community with more updates. The forums will be panel format and will include five panelists and Postel. More information will be released soon.

A new senator orientation was held prior to the formal meeting. Ten new senators were recognized.

Professor Jasmine Farrier led discussion on the action item of a new B.S. in Neuroscience. The initial meeting was held proposing this new program last May. She said concerns have included stretched resources and cannibalization of other majors. The program would include a collaboration between A&S and the School of Medicine. Farrier noted that Arts & Sciences Dean Kimberly Leonard-Kempf supported the proposal.

“We hope that instead of cannibalizing other students that this is used to recruit new students,” Farrier said.

The program was approved by the Faculty Senate.

The SGA reported that they have created a statement in support of DACA and it is on the SGA website and has also been shared via social media. The SGA has received positive feedback throughout the summer on the SAC and dining expansions.

The governing body is currently outlining qualities the next UofL president should have, and is consolidating redundancies in its constitution.

The Staff Senate did not meet in August, but did hold a forum on both the Belknap and HSC campus. Members met with John Elliott, the new AVP for Human Resources, and expressed concerns over the hiring freeze and continued uncertainty about finances.

“Every Faculty Senate chair has initiatives. Mine are to increase the role of research in the classroom and to put together an ad hoc committee on best practices in teaching evaluations,” she said.

Trucios-Haynes hopes to host an event in the spring to highlight the intersection of research and teaching.

Also, the Committee of State Faculty Leaders meeting is being held this week. Agenda items include recommendations for faculty representation on the CPE.

Finally, Trucios-Haynes is hoping to define the role of faculty members in the presidential search. The search firm, R. William Funk & Associates of Dallas, was announced this week. The contract runs through June 30, 2018.

Billingsley provided updated numbers about UofL’s graduation rates, which are now at 52.8 percent. The retention rate has increased in the past two years, from 79 percent to 80.6 percent.

“This is great news. If we can move the cohort rate this year and do it consistently, we will get to a 60 percent graduation rate by 2020,” he said.

Taylor-Archer presented the University Diversity Plan, available in its entirety online, which was created in conjunction with a number of campus groups and entails three focus areas – opportunity, success and impact.

Of UofL’s nearly 23,000 students, 20.3 percent are underrepresented, including 11.1 percent African American. The five-year target is to get that number up to 23 percent and 14 percent, respectively. Taylor-Archer noted one challenge with achieving that goal is the expected flat high school graduation rate among African Americans.

UofL has won a Higher Education Excellence in Diversity Award for the fourth year, Taylor-Archer said.

Fox noted that the Libraries is not renewing its largest (by cost) journal package, Elsevier’s ScienceDirect. There will be an opportunity to re-add individual titles, however, and the Libraries website will include a link for feedback about what those titles may be if the cost permits.

To put the package in perspective, the package costs about $2.2 million, compared to less than $1 million for the next largest package.

“We’re looking at all of them to see if we can cut more. The only place I can really cut is collections. I don’t have an operations budget and we have 30 less staff than we did when I started seven years ago,” he said.

The next Faculty Senate meeting is Oct. 4 on the HSC campus. 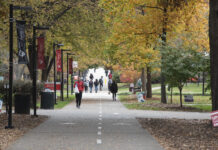 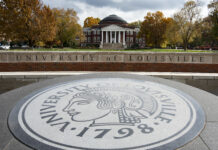