SGA representative Meredith Cooksey reported for her last time and introduced the new SGA rep: Jonathan Fuller, a sophomore nursing major. Cooksey said there are four resolutions in front of the body, including the Presidential Search Act of 2017, available online.

Staff Senate met in March with an update from Interim President Greg Postel on the SACS accreditation process and the budget. The annual Day of Service is April 21, and some staff members expressed concerns about taking the day for service in a time of downsizing, according to the report. The senate formed two ad hoc committees – one tasked with revising the body’s mission statement and the other on presidential qualities.

Enid Trucios-Haynes posted her Chair’s report online, reporting about the Provost’s Budget Development Committee which addresses the new approach to budget management announced by Interim President Greg Postel to the deans, vice presidents and constituency representatives in February 2017. Trucios-Haynes has created a Faculty Senate ad-hoc Budget Committee to ensure faculty input in the budget discussions. The committee includes Senators from each unit and members of the Planning and Budget Committee, Executive Committee members, AAUP representatives and others. Karen Hadley and Roger Bradshaw are co-chairs.

Also, the Presidential Search Committee met for the first time on March 15, where the body adopted the Faculty Senate document about the attributes, experiences and skills for a 21st Century University President. More information from Trucios-Haynes’ report is online.

The Faculty Senate held a discussion about whether or not to adopt the Executive Committee’s statement on UofL’s Weapons Policy, which is: “The UofL Faculty Senate Executive Committee affirms its support of the University’s Deadly Weapons-Destructive Devices Policy (PER-1.21), which prohibits deadly weapons on any property owned, leased, operated or controlled by the university, with specific exceptions. Further, the UofL Faculty Senate affirms its support of KRS 527.070, which prohibits possession of weapons on school properties, with specified exceptions. As faculty, we have primary responsibility for the education of the students at UofL, and we firmly believe that ensuring a safe, weapons-free, campus is an essential foundation to the mission of providing an excellent educational experience.”

Some senators questioned if a gun-free campus means a safe campus. Another opined that a campus is a place dedicated to education and having a vigorous debate and is “not the place for firearms.”

UofL’s current policy is to have a weapons-free campus and the Senate agreed to endorse the XC’s original statement, with a few “nays.”

Billingsley provided a number of updates including:

Billingsley also reported about the ongoing budget shortfalls. In January, it was found that the university had a deficit of about $48 million. Administrators rebased the budget this year on actual expenses in 2016 to end the year with a balanced budget.  In addition, measures have been adopted to address the $48 million shortfall and to create funding for needed investments.

“To get a working fund to address strategic initiatives and develop the ground for revenue enhancements, we took 3 percent from across the board,” Billingsley said. “This is only from the general fund.”

General funds are constituted from the state appropriation and tuition and fees revenue. One of those revenue streams is enrollment and we are aiming at 600 students beyond what was enrolled last fall.

Most of the programmatic growth will be in graduate and undergraduate as opposed to professional schools, most of which are maxed out.

“The engineering and business schools attract the students who present the best profile and support other elements of our academic goals. Both Speed and the business school will get additional support. So will the College of Arts & Sciences so general education courses can be offered in a sufficient number,” Billingsley said.

“What is happening now is very different than what has happened before with budget cuts. Ordinarily when we reallocate money, we cut a budget and move the cut into the hole that the deficit required. Now we’re reallocating to address needs that will provide us with additional revenue or address strategic initiatives,” Billingsley added. “It’s not pleasant and it’s not pretty, but that’s the way we’re going to do it.”

He added that there are some risks involved with this approach; namely ensuring our enrollment goals and retaining the students we already have.

“(Retention) is the most efficient way to do this. If they stay long enough, they’ll get a degree and we’ll be better off in performance measurement,” he said.

Billingsley said the next year will be spent working toward the a strategic budget model for the following year which will involve consultation with the Faculty Senate, among other groups on campus.

“We’re going to have to start working toward the budget structure we want going forward beginning in June when the board approves this budget,” he said.

Billingsley and Susan Howarth, director of Budget and Financial Planning, fielded some questions from the senators, noting:

Begany, who has been in his role for six months, is tasked with generating more revenue through enrollment and retention. He provided an update on his strategy to fulfill this objective. Among his challenges and initiatives:

“We have a lot of opportunity here. We haven’t been as much about growth in the past,” Begany said.

Committee on Committees and Credentials: Ben Foster, chair, has reached out to people who served on committees last year to see if they’d be interested in doing so again this year. His report is available online.

UofL’s baseball team is ranked No. 2, while softball beat Notre Dame in the series finale, our 2V8+ was named ACC Crew of the Week, Men’s Outdoor Track and Field is ranked No. 25 in the first USTFCCA rankings, and our spirit groups are headed to the national championships.

Student-athletes who have earned a cumulative GPA of 3.25 or higher for all semesters at UofL will be recognized at the 21st Annual Red and Black Celebration of Scholar Athletes and their Faculty Mentors—on May 7 at noon, in the new Thorntons Academic Center.

The next Faculty Senate meeting is May 3 from 3-5 p.m. at Ekstrom’s Chao Auditorium. 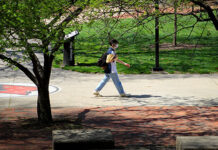