Two days after President Donald Trump nominated him to serve on the U.S. Court of Appeals for the Sixth Circuit, Amul Thapar, a U.S. district judge for the Eastern District Court of Kentucky, spoke at the McConnell Center.

During his March 22 visit, Thapar discussed his judicial decision-making process, how his chambers operate and the importance of developing meaningful mentorships with a group of McConnell Scholars. He also spoke to a University of Louisville political leadership course about lessons from his career and how the federal court system and Article III institutions have developed to serve justice and the American people.

“As a future law student, hearing from Judge Thapar directly about his legal career and judicial philosophy was an invaluable professional and intellectual opportunity,” said Jacob Abrahamson, a senior McConnell Scholar who will be attending the University of Pennsylvania Law School in the fall.

Sidney Cobb, a sophomore McConnell Scholar, called the two sessions “energizing” and said she is now developing a plan on how to get into the best law school and earn the best clerkship possible based on Thapar’s advice.

“What a phenomenal opportunity for young students thinking about the Constitution and about potential careers in law and law enforcement,” said Dr. Gary Gregg, director of the McConnell Center. “Judge Thapar is an impressive legal mind and generous teacher. His seminars left us all with a better understanding of the judiciary and energized our students interested in serving in the legal field.”

Gregg invited Thapar to the center as part of its local leader series, which connects McConnell Scholars with city and state leaders.

President George W. Bush nominated Thapar, the first Article III judge of South Asian descent, to the federal bench on May 24, 2007, and the U.S. Senate confirmed him by unanimous consent Dec. 13, 2007. Prior to his confirmation, Thapar served as the U.S. Attorney for the Eastern District of Kentucky.

Thapar, of Covington, previously worked for Williams & Connolly in Washington, D.C., and has taught at the University of Virginia School of Law, Vanderbilt Law School and Northern Kentucky University’s Chase College of Law. He received his undergraduate degree from Boston College and his law degree from the University of California, Berkeley. 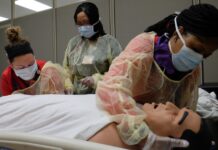