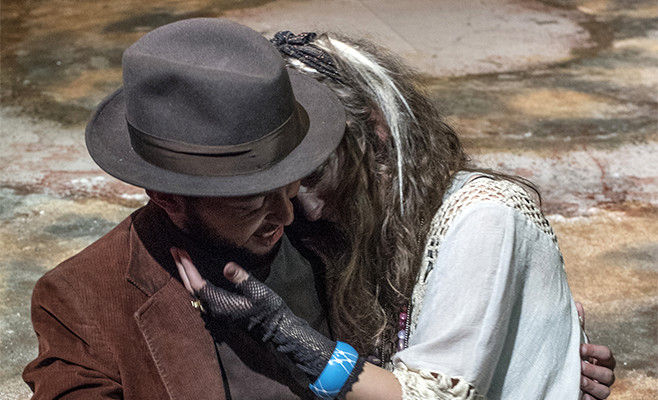 UofL Theatre Arts kicks off its 2015-16 season Oct. 21 with “Polaroid Stories,” a powerful examination of truth and mythology told through the hard-knock lives of street kids.

Written by Naomi Iizuka, characters are based on interviews she did with prostitutes, drug dealers, runaways and homeless youth. Adapted in part from Ovid’s “Metamorphoses,” the play uses Greek mythos to frame the characters’ loosely connected stories. Identities aren’t certain, as characters often lie to soften the dark realities of their lives.

“The characters in ‘Polaroid Stories’ tell stories to get what they want and to survive a harsh economic and social environment,” said Laura Early, director and assistant professor. “Their individual and collective stories reveal their shared humanity, transforming the storyteller and the audience.”

Kevin Gawley, assistant professor and resident scenic and lighting designer, used a mix of projection and lighting designed by theatre student Will Dyre to bring the set’s stark, abandoned cityscape to life. The stage also will feature an 8-foot circular revolve.

Cast members, comprised of Theatre Arts students, created and integrated choreography and soundscape into the production as well with beat box, vocal percussion and songs.

“Polaroid Stories” was originally commissioned by En Garde Arts in New York, produced in the 1997 Humana Festival of New American Plays at Actors Theatre of Louisville and received the 1998 PEN Center West Award for Drama.

This play contains strong language and material, strobe lighting and a simulated gunshot, which may not be suitable for sensitive audiences.