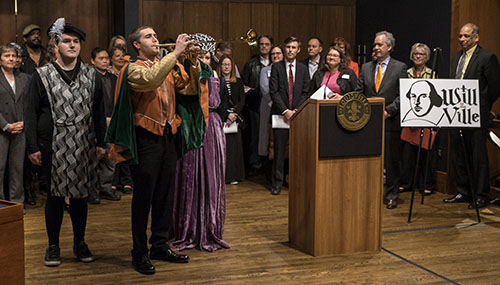 This collaborative initiative — spearheaded by the University of Louisville, Frazier History Museum and the Louisville Free Public Library — involves more than 45 arts, cultural and educational organizations throughout the region. As part of the international commemoration of the 400th anniversary of Shakespeare’s death, it aims to make Louisville a “city of Shakespeare.”

Shakespeare events begin this month and continue throughout 2016, with many happening on campus. The celebration culminates with the arrival of a national traveling exhibit, “First Folio! The Book that Gave Us Shakespeare,” on display at the Frazier History Museum Nov. 10–Dec. 10, 2016.

The First Folio, published in 1623, seven years after Shakespeare’s death, is the first collected edition of his plays, many of which were not published during his lifetime. Two of Shakespeare’s fellow actors compiled 36 of his plays, hoping to preserve them for future generations. Without it, we would not have 18 of Shakespeare’s greatest works, including “Macbeth,” “Julius Caesar,” “Twelfth Night,” “The Tempest,” “Antony and Cleopatra,” “The Comedy of Errors” and “As You Like It.”

When the First Folio arrives in Louisville, its pages will be opened to one of the most quoted lines in the world, “to be, or not to be,” from “Hamlet.” Accompanying the rare book will be a multipanel exhibition exploring the significance of Shakespeare, then and now, with additional digital content and interactive activities.

The exhibit — co-hosted by UofL, the Frazier and LFPL — is made possible through a grant from the Folger Shakespeare Library, the Cincinnati Museum Center and the American Library Association and is traveling to all 50 states. Louisville was selected as the representative site for the state of Kentucky.

“The University of Louisville is very excited to play a major role in bringing Shakespeare’s First Folio to Louisville. The enthusiasm for this project is shared among many of our faculty, staff and students on all our campuses. At least 13 departments already have programming planned as part of the celebration, and we are adding events every week,” said Pinto, citing several examples:

UofL played a significant role in Monday’s press conference at the Frazier, with representatives from many departments in attendance. Students, dressed in renaissance garb, livened the affair. Blake Herron, a grad student in Music Performance, sounded a herald trumpet to open the event, while freshman theatre majors Grace Roth and Jordan Lyons looked the part with costumes from the Theatre Arts Department’s costume shop. UofL’s Archives and Special Collections set the stage with a copy of Shakespeare’s Fourth Folio from the Rare Books collection.

An ever-growing schedule of programs, activities and performances is available online at LFPL.org/WillintheVille. The public can follow the conversation on Twitter and Instagram using the hashtag #WillintheVille. Most will be free and open to the public.

“We’re thrilled to partner with so many community organizations for what will be one of the largest collaborations in Louisville history,” said UofL English professor Andrew Rabin, adding that the program is a testament to the worth of “the continuing study of literature and a liberal arts education.” Rabin coordinated the effort to make Louisville the Kentucky site for the First Folio visit as well as the related UofL programming.