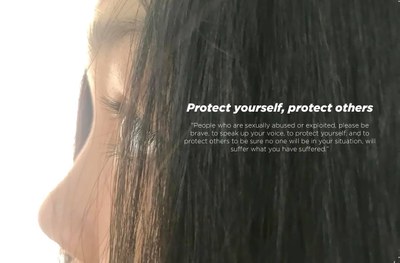 The 70 photographs hanging now in Schneider Hall Galleries range from colorful, flowering trees to sorrowful, shocking images of drug use and sexual exploitation.

They were taken in Hai Phong, Vietnam, by youth participating in a month-long photovoice project facilitated by UofL students and faculty. The youth, aged 12-19 years old, have all lost parents to an HIV epidemic in Hai Phong. The project used photography and different forms of storytelling to help them explore themes they identified in their lives.

“What was interesting to me was that we covered so many heavy subjects, but what showed through was the youth’s ideas related to their bright futures, social change and pride in what they and their families have been through and what Hai Phong has been through,” said Lesley Harris, assistant professor at the Kent School of Social Work.

Harris worked with community organizations serving grandparents and youth affected by HIV in Hai Phong10 years ago through the nonprofits Save the Children and the HIV and Health Care Support Centre (HHCSC).

Hai Phong, a port city with a seafaring economy, is located in a high traffic area for opioids moving from Middle Eastern to Asian markets. The influx of drugs resulted in an HIV epidemic that has left a large generation of orphans.

Harris wanted to serve that population again, many of the children now grown into adolescents, using photovoice, a participatory research methodology designed to empower small groups through photography and storytelling.

She teamed up with Marion Hambrick, associate professor in the College of Education and Human Development, and Kyoungmee “Kate” Byun, who was a professor of interior design at Hite Art Institute, but now teaches at Northern Arizona University.

The trio was awarded a grant from UofL’s Cooperative Consortium for Transdisciplinary Social Justice Research.

“It became a much larger project than we anticipated,” Harris said. “But it was very worthwhile. Beyond research and program development, it was bringing something to the community that was needed and appreciated and gave the kids a program to be a part of for the month of July,” Harris said.

In the mornings, the team led activities in team building, goal setting and creative expression, which were informed by the youth development work of Williams and Bloomer, social work doctoral students. As the day progressed, the group focused on photovoice.

“We started with an introduction: What is photovoice, how you take and edit photos. We addressed safety, physical and emotional safety. Participants need to ask themselves, are you ready to revisit this place, or this difficult subject matter within your life?” Harris said.

Pictures emerged from their everyday world, some of them gritty, real examples of the social ills their community and family faces, like bottles of booze in an alley or lines of powder on a mirror. Others are more introspective, like a girl’s down cast face and a picture of a toy.

The group discussed the photos and journaled about them. Together, they decided they ultimately wanted to use them to create educational videos and campaigns for residents of their city.

“Classically photovoice projects engage political leaders and people of influence, but that’s not really possible in Vietnam,” Harris said, as the country is communist. “We had to allow them to lead with what they wanted, and what is possible and safe within their cultural context.”

Byun curated the photos and narratives for the exhibition on display at Hite through Feb. 6 called, “Our World Our Say: Understanding HIV Risk and Resilience Among Adolescents Who Have Been Orphaned by HIV/AIDS in Hai Phong, Vietnam.”

Byun plans to mount the show again at the Asia Institute-Crane House in Old Louisville and at a gallery in South Korea, further exploring the design and presentation of the exhibition.

Chloe Scoggins and Laura Coleman, both seniors in interior design at UofL, are now working with Byun on a research paper born of the project: “Does the Physical Setting of an Exhibition Affect Audiences’ Understanding of Narratives?” The team has been invited to present that work at the Environmental Design Research Association conference this April in Tempe, Arizona.

“Our World Our Say” is free and open to the public 9 a.m. to 5 p.m. Monday through Friday through Feb. 6 in Hite’s Schneider Hall galleries.