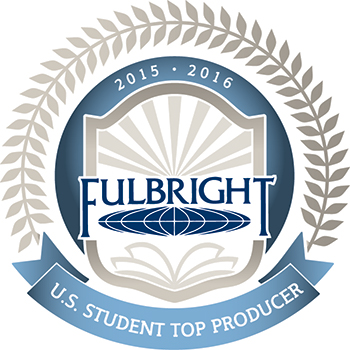 The University of Louisville has been recognized as one of the nation’s top institutions for producing student Fulbright awardees during the 2015-2016 academic year.

The list of top producers was released Feb. 22 by the Fulbright organization and published by the Chronicle of Higher Education. The Fulbright program is sponsored by the U. S. Department of State’s Bureau of Educational and Cultural Affairs and promotes cultural exchanges with more than 140 countries. The prize is one of the most prestigious in academia.

UofL announced 10 Fulbright winners for the 2015-2016 academic year and has had 89 winners since 2003—more than all other Kentucky institutions combined.

“We are thrilled to be recognized as one of the nation’s top producers of Fulbright scholars,” said UofL President James Ramsey. “This is a point of pride for our entire campus community because dozens of people work together each year to make sure that our students are well-prepared to compete for the world’s most prominent academic scholarships.”

She also said this is not the first time UofL has earned a spot on the top producers list: There were 14 Fulbright student scholars in both 2010 and 2011.

Condon said she is eagerly anticipating the results of the 2016-2017 Fulbright competition. UofL will announce the names of those scholars beginning in late March and continuing through early summer.