UofL competed with 300 colleges and universities across the nation in the 2020 RecycleMania Tournament and achieved impressive sustainability results.

This annual challenge for higher education institutions engages students, faculty and staff in advancing zero waste ethics. This year, the competition’s duration was shortened from eight to five weeks in response to widespread closures due to COVID-19. From Feb. 2 through March 7, schools reported on their zero waste efforts in multiple categories.

In the Diversion category, UofL placed first in the state, first in the Atlantic Coast Conference and 10th in the nation for keeping more than 63% of its waste (including organics, plastic, paper, cardboard, metal and glass) out of the landfill.

Full results of the competition can be seen here.

In the Waste Minimization category, UofL placed third in the state and 53rd in the nation for reducing total waste production to 26.46 pounds per person. And in the Total Recycling category, UofL placed second in the state and 38th in the nation by recycling 334,020 pounds of paper, cardboard, plastic, metal and glass and composting 86,315 pounds of food and kitchen waste from dining services for a total of 420,335 pounds.

Justin Mog, assistant to the provost for sustainability initiatives, is encouraged by these results and connected them back to UofL’s commitment to addressing global climate disruption.

“All these efforts to keep waste out of the landfill equate to reducing our carbon emissions by 614 metric tons of CO2 equivalent,” he said. “According to the EPA, that’s as impactful as taking 133 cars off the road for a year, powering 104 homes with renewables for a year, switching 23,326 incandescent lamps to LEDs, or growing 10,153 tree seedlings for 10 years.”

As a member of the Climate Leadership Network for colleges and universities, UofL is committed to reducing campus net greenhouse gas emissions and achieving climate neutrality by 2050. In 2010, UofL released its Climate Action Plan, a comprehensive roadmap for reducing university emissions to net zero. The plan is shepherded by UofL’s Sustainability Council, a group of more than 60 faculty, staff and students appointed by the provost that coordinate the plan’s implementation and conduct an annual reporting of UofL’s greenhouse gas emissions. 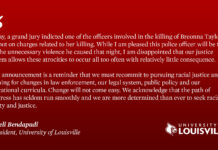