Stumler has been the handler and trainer of Harley throughout her eight years of competition. Harley finished 4th in her class at WKC Masters Agility last year. What makes Harley’s victory even more special is that she is a cancer survivor.

“Harley has already had a remarkable agility career, and I’m really just happy she is still here and wants to run with me after everything she went through a couple of years ago,” Stumler said.

UofL News had the chance to talk to Stumler about her involvement in agility canine tournaments, Harley’s battle with cancer and the duo’s future.

UofL News: How did you get involved in agility canine tournaments?

Stumler: A friend got me into agility because she was taking classes with her dog and knew I had a crazy Aussie puppy (Gunner) who might benefit from something to do. She asked if we wanted to tag along to class one night when Gunner was about six months old, and it was all downhill from there. We started out like a lot of other people in agility, saying I just wanted something fun to do with my dog and we weren’t going to compete. Obviously, I didn’t stick to that, and 10 years later we’ve traveled all over the eastern half of the country going to various events.

UofL News: How old and what breeds are Harley and Gunner?

Stumler: Harley is a 10-year-old Boxer/Australian Cattle Dog mix, and Gunner is an 11.5-year-old Australian Shepherd.  I also have a third dog, another Aussie named Magnum, who trains in agility but doesn’t currently compete. He does compete in herding and lure coursing though.

UofL News: Can you elaborate on Harley’s battle with cancer and her path to recovery? How well did she transition back into competing?

Stumler: She had a couple of surgeries to remove mast cell tumors and a lymph node from both of her back legs. She ended up with a skin graft on one of the tumor sites on her lower leg, which made her recovery a little longer and left her with a pretty ridiculous scar. She was back to competing in just a couple of months though, and bounced right back to being her perfect self by going six for six her first weekend back. We tried to do a chemotherapy that was specifically targeted to mast cell tumors, but her bloodwork wasn’t ideal while she was on the medication, so her vet recommended she stop taking it and to just monitor her for any future masses. Thankfully, we haven’t seen any recurrence.

UofL News: Between Harley and Gunner, what kind of awards and accolades do they have?

Stumler: Gunner is my first agility dog so he had the misfortune of enduring all of my inexperience and bad training early on. We still managed to make the Performance Speed Jumping finals as the No. 1 seed and the relay finals of the team competition with our partner at the USDAA Cynosport World Games in 2015. He also qualified for his first AKC National Agility Championship this year at 11 years old. He has quite a few titles in AKC and USDAA agility, and we’re still working on earning his championship titles in both venues.

Harley has earned a lengthy list of titles, including multiple championship titles in AKC and USDAA agility. In addition to winning her class at Westminster this year, she placed fourth there last year and has placed second and third in the finals at the AKC National Agility Championship in 2017 and 2014 respectively.

UofL News: How much of a big deal is Harley’s win in the Westminster agility tournament in dog tournaments?

Stumler: Westminster is quite a prestigious event, but this is only the sixth year they’ve hosted the agility competition. I think for most of us in agility it’s very cool and a pretty big deal since it’s nationally televised and receives quite a bit of press compared to other agility events.

UofL News: What is your biggest takeaway from competing?

Stumler: I’ve learned a ton about training, health, behavior, my own mental management, you name it.

UofL News: Do you see a continuing future in agility tournaments?

Stumler: Definitely! I’ve made a lot of great friends through agility, and it’s a lot of fun and keeps us all in shape. We’re heading to Tulsa, Oklahoma, for the AKC National Agility Championship, and we’ll be competing at quite a few local shows throughout the year.

UofL News: What are your dog’s favorite treats? Other hobbies?

Stumler: Harley isn’t picky, so anything but lettuce is edible in her book. Usually we train with chicken, cheese, or other soft meaty treats. They also enjoy occasional stops for vanilla ice cream on the way home from competitions. They both enjoy hiking, playing fetch, and we recently discovered lure coursing. Gunner also enjoys barking about everything.

Bonnie Dean contributed to this story. 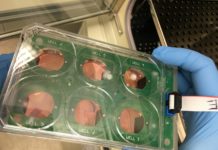