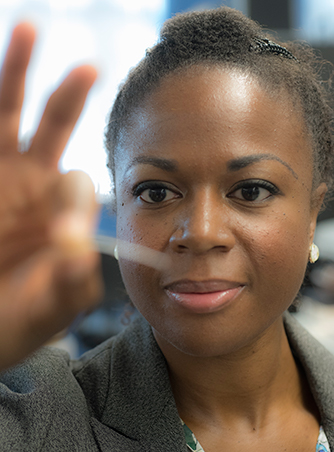 For people with severe hearing loss, a cochlear implant would cost about $30,000 and potentially damage residual hearing. But what if a faculty member at the University of Louisville had a cochlear implant that could be mass produced at 1/10th the cost and not damage the inner ear?

Johnson, who moved to Louisville from Michigan, has been manufacturing her device in the MNTC’s cleanroom.

“A move to Kentucky would not have been possible without the world class facility and staff at UofL” Johnson said.

Johnson has received more than $300,000 in federal and state investment funds to continue development of her implants.  She says several major sellers of cochlear implants in the United States have expressed interest in her invention as well as smaller companies in India and China. She hopes to fully prove out the technology over the next two years and partner with a cochlear implant manufacturer to begin clinical trials.

“We’re going to expand opportunities in the technology sector for brilliant and talented people to work in Louisville” she said.

Johnson is faculty in the College of Business and teaches courses in Business Plan Competition and New Venture Creation.