A research team at the University of Louisville and the UofL Health – Brown Cancer Center has developed a structural model allowing study of longer genetic sequences that will aid in the discovery of potential anti-cancer drugs. The sequences, known as G4 quadruplexes, are believed to be key locations involved in the mutation of certain genes into cancer-causing oncogenes.

The UofL team, led by John O. Trent, professor of medicine and deputy director of basic and translational research at the Brown Cancer Center and Jonathan B. Chaires, professor of medicine, used the Advanced Photon Source, a U.S. Department of Energy (DOE) Office of Science user facility at DOE’s Argonne National Laboratory near Chicago, to define and model the longer genetic sequence structures that are believed to be the source of changes that mutate healthy cells into cancer cells.

Previous methods limited most studies to strings of fewer than 33 nucleotides. The new model developed by the UofL team enables researchers to study sequences of up to 70 nucleotides, which may provide more accurate targets for drug intervention.

By combining multiple processes, the team developed models of the G4 quadruplex structures that can be used in computer analysis to virtually test how drug and disease molecules might interact with these sites before real-world testing in the lab. This testing may aid in the discovery of drugs that could inhibit the mutation process for oncogenes c-Myc, c-Kit and k-Ras, which are associated with lung, pancreatic, colon and other cancers.

“Using integrative structural biology, we can determine that these oncogene promoters can form unique, complicated higher-order structures. We can use these structures for discovering specific inhibitors to stop gene transcription at the DNA level without nonspecific DNA-binding side effects,” Trent said. “This opens up targeting DNA by therapeutics like we target proteins.”

The research to develop the model was published in Nucleic Acids Research earlier this year. A profile of the team’s work has been published online by the Advanced Photon Source and will be featured in their annual report later this year.

The team now has begun using this structural understanding and the new models in ongoing anti-cancer drug discovery work, which includes data processing using the combined power of computers located in K-12 schools across Kentucky. The dual-purpose computer grid is a partnership with Dataseam, established in 2003 and funded by the Kentucky General Assembly to provide computing infrastructure, workforce development and educational opportunities for students and staff in Kentucky school districts. 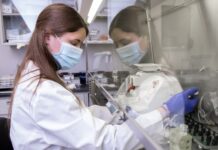