For entrepreneurs like Matt Jamie ‘98, business ideas come at different times and in different ways. As a local Kentuckian, the idea of microbrewing soy sauce was, and still may be, considered a very different idea.

After graduating with a bachelor’s of science in exercise science, Jamie moved to Gainesville, Florida, to get his master’s in exercise physiology until his path changed course.

Jamie enjoyed cooking and initially thought it to be a hobby. Once he got his first job in the kitchen, he realized his hobby was quickly turning into a passion. During that time, he began thinking out of the box when it came to cuisine.

“One night, with a buddy of mine, I said, ‘No one is microbrewing soy sauce in the U.S.,’ and it turned out to be a true statement,” Jamie said.

In 2005, Jamie moved back to Louisville and continued his research about microbrewing soy sauce. As a self-taught chef, Jamie learned everything about cooking on his own, but once he got the idea of his business, he enlisted the help of others.

“I used every free service available to me, including the University of Louisville’s entrepreneurial studies program,” Jamie said. “I had never written a business proposal before, but was so blindly passionate about this idea that I had that I was not going to be told I couldn’t do it.”

“Bourbon Barrel Foods was a company meant to pay for my passion of soy sauce,” Jamie said. “In 2006, we had our first products on the shelf, and it was around a time that the state was really trying to push for tourism with the bourbon business.”

Bourbon Barrel Foods grew as bourbon tourism grew and almost every year since, the company has experienced growth. The business’s growth is in many ways due to Jamie’s idea of what products should be created.

“One of the first products we started making was bourbon-smoked sea salt,” Jamie said. “And in my house, you didn’t ask for the salt without getting the pepper, too, so we did bourbon smoked pepper.” Now, Bourbon Barrel Foods’s salt and pepper are part of more than 100 products. 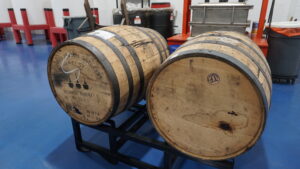 Since the beginning of Bluegrass Soy Sauce, Jamie had the opportunity to help others who are looking to pursue the same passion.

“I’ve been pretty open about how we make soy sauce and our story, and now other people around the world are doing it,” Jamie said. “An owner of a business from the Netherlands wanted me to show him how to make soy sauce. He made five trips to Kentucky. We showed him everything we do, and now they’ve been Europe’s only micro-brewed soy sauce for the last six years.”

Mentoring others in the process of microbrewing soy sauce is not his only path of helping others. While Jamie initially never planned on having a business that employed others, Bourbon Barrel Foods employs 35 people.

“We’ve grown because my employees all embrace the brand and what it is that we do,” Jamie said. “You can’t ask someone to love the brand, but my employees do, which is really cool and a big part of our company.”

Looking back, although Jamie is proud of where he has come from, he has no plans of slowing down.

“Growth and fulfilling the visions of where I want the company to be is something that keeps me going,” Jamie said. “Whenever I find myself going into the warehouse on my own, it’s like wow, everything I’ve dreamed of is becoming true, but I see so much more that this company can do.” Bourbon Barrel Foods does have a lot more it can do, and with an exciting expansion, Jamie believes there is a lot more room for growth.

“We are doing an expansion in our warehouse, from 1,000 square feet to a 21,000-square-foot facility,” Jamie said. “There’s a dedicated room for smoking products. I used to smoke in a smoker the size of a small fridge, and now we have six smokers the size of pickup trucks.”

As an entrepreneur, Jamie gets to continue creating and growing Bourbon Barrel Foods. With expansion, that will mean many other people will get to experience this Louisville product.

“It’s exciting for me, and creating a sense of community around something like that is fun,” Jamie said. “I’m fortunate enough to have been the first, but now we want to continue and strive to be the best.”