Major Mitisha Martin is mighty grateful for second chances, but she has put in the work to realize her dreams.

The daughter of a woman who worked two jobs to support her children, Martin joined the Kentucky Army National Guard as a young college student in Bowling Green. However, the timing wasn’t right and she admittedly wasn’t ready for the challenge, leaving after a month of basic training and receiving a discharge.

After that she worked in restaurants and a factory but found new inspiration when a church acquaintance hired her as an assistant in a dental office. With the Black female dentist as her professional role model, she set out on her career path.

“You fix people’s teeth and they hug you and cry because they are so thankful,” Martin said. “You can see the difference it makes in people and their confidence and their overall quality of life. Making that difference is so rewarding. I didn’t find the dental field; it found me.”

That plan meant Martin would need financial help to complete her schooling, so she pleaded for a waiver from the Guard to rejoin and this time completed her basic training with honors. After earning her undergraduate degree and working as an enlisted soldier for a decade, she was commissioned as an officer upon acceptance into UofL’s School of Dentistry, using her National Guard benefits to help pay for her advanced degree.

Today Martin co-owns a Louisville dentistry practice with Kristin Harris, a friend since her dental school days. “She is so determined with everything she sets her mind to,” Harris said. “I admire her ability to give 100% to every project she starts, and the dedication she has to both her career and her family equally. That balance can be difficult, but she seems to carry it with ease.”

Martin is in her 24th year with the National Guard, working in Poland as a dentist with the 1163rd Area Support Medical Company during her second deployment, after serving in Afghanistan in 2015.

“Growing up, I never would have dreamed in a million years that I would be a dentist,” Martin said in an interview with National Guard News. “I want others to know they can do it too. Whatever your dream is – no matter how big it is — you can do it. You just have to be willing to dig in and fight for it. To never give up.” 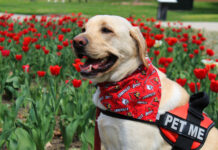