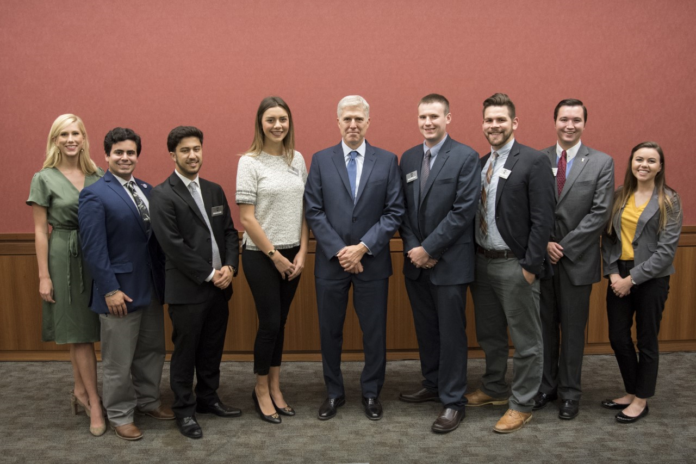 U.S. Supreme Court Justice Neil Gorsuch spoke to more than 500 people during a public event at Comstock Hall, but it was the time he spent behind closed doors with the University of Louisville’s McConnell Scholars that may have left the greatest impression.

“He was down-to-earth and very humble” said UofL freshman Emma Lawson. “He didn’t treat us as being beneath him and he was wanting to know more about us.”

Lawson, Baldock and 30 other McConnell Scholars had a private question and answer session with Gorsuch who was on campus as a guest of the McConnell Center and its Distinguished Speakers Series.

Freshman Grayson Ford told Gorsuch he hopes to become a lawyer but isn’t sure what area of the law he wants to pursue. According to Ford, Gorsuch told him “I wasn’t so sure either and now I’m a Supreme Court justice.”

Gorsuch showed more flashes of humor during his 40-minute prepared speech. While praising the United States’ separation of powers between the branches of government, Gorsuch said giving federal judges the power to make laws would be a bad idea.

“Wouldn’t that be sort of like asking Lamar Jackson to do the kicking?” he joked. Jackson is the Heisman Trophy winning quarterback on UofL’s football team.

Gorsuch also recounted his predecessor’s fondness for an elk he had killed and mounted on a wall in his chambers. When Justice Antonin Scalia died, the Supreme Court staff wasn’t quite sure what to do with the elk that Scalia had named “Leroy,” so they gave it to Gorsuch as “a welcome to the neighborhood gift.”  Gorsuch has “Leroy” in his office now and says he has some things in common with the elk: “we’re both natives of Colorado; we both received a rather shocking welcome to Washington, D.C. and neither of us will ever forget Justice Scalia.”

Much of the justice’s speech focused on the concept of originalism in interpreting the U.S. constitution. Gorsuch says originalism isn’t perfect but “may be the least worst option available” to judges.

Gorsuch says he’s optimistic about the future of the politically divided country and its courts. “I do not believe in red judges or blue judges. We wear black,” he said.

While on campus, Gorsuch also met with 30 soldiers taking part in the McConnell Center’s 30-day Strategic Broadening Seminar, a leadership and training program for the U.S. Army.