When Alora Mazarakis was a young girl, she didn’t play with Barbie dolls. Instead, she played with airplane toys and Pilot Mickey Mouse and Flight Attendant Minnie.

“My dad was a pilot for UPS, and I always had an affinity for space,” said the Speed School alumna. “When I was in elementary school, I told my dad I wanted to go to college at NASA.”

She had no idea how that child’s dream would actually one day come to fruition.

Fly me to the moon

Mazarakis, who graduated from UofL’s J.B. Speed School of Engineering with her bachelor’s degree in electrical engineering, and a minor in astrophysics in 2019, was part of the team for NASA’s Artemis I launch on Nov. 15, the first of a series of space missions that aims to return humans to the moon and eventually, send them to Mars.

The 26-year old, who has been employed by NASA since April 2021, completed her MS in electrical and computer engineering specializing in radio frequency and avionics engineering from Embry Riddle Aeronautical University one month later. She worked as a NASA contractor for two years before her current position as a flight communications and tracking electrical engineer.

“My job in Artemis I is to be a part of the team that tests, verifies and prepares all the radio frequency and antenna systems for launch readiness, as well as the video systems on the Orion crew module,” Mazarakis said. “On launch day, we sit in the firing rooms and say, ‘Go for launch’ on all of the communication systems.

“It’s a feeling like no other. It’s almost like a day that you feel will never come, but when it does, it feels like your first child being born. You’ve put all this work and time and effort into this massive system,” Mazarakis said. “You’ve worked with so many other teams and everybody has really given all their blood, sweat and tears into a successful and safe launch.”

Mazarakis explained that the name Artemis encompasses all of the missions to the moon that NASA will be executing in the next decade.

“Artemis I is the first of a couple increasingly complex missions,” she said. “We will launch Artemis II, which is going to do an orbital flight. Artemis III will be the one where we plan on putting boots on the moon.”

From aspiring engineer to Cape Canaveral 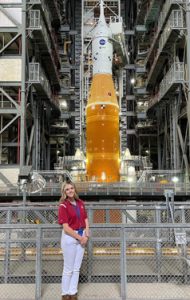 Originally from New York City, Mazarakis and her family moved to Shelbyville, Kentucky, when she was a middle-schooler. As a high school senior, Mazarakis visited Speed School friends and saw the course work they were doing.

“It occurred to me that I really loved the idea of problem solving, critical thinking, thinking and making things,” she said. “Once I decided on engineering, I knew it would be Speed School because it’s the best engineering school around. Everybody knows their engineers go through a much more rigorous curriculum and are much more prepared for the real world.”

Mazarakis first majored in bioengineering, but changed gears to pursue aerospace once she joined the River City Rocketry (RCR) team, a student organization dedicated to the hands-on building of rockets. Named Student of the Year in 2019, Mazarakis attributes much of her ability and the jobs she’s been offered in her field to her foundational experience with Speed School and with RCR.

“River City Rocketry wasn’t just a club, it was a team where they only pick the people who have real passion that’s palpable, people who are going to be dedicated and spend all their extra time at the engineering garage and really learn how to build rockets,” Mazarakis said.

While a member of RCR, Mazarakis helped her team win the NASA student-launched competition against schools like Purdue, Notre Dame and Vanderbilt.

“These are schools that not only have aerospace programs, but the best in the nation,” she said.

The networking opportunities afforded by RCR and organizations like Phi Sigma Rho Sorority for Women in Engineering helped her secure an instrumental co-op rotation with Red Wire Space, sending her down the path to aerospace success.

“The fact that Speed School has so many alumni who end up at big space companies like NASA, Blue Origin, Gulf Stream Aerospace, SpaceX, is because we weren’t just sitting in class reading textbooks about aerospace,” Mazarakis said. “To be successful, we had to learn it ourselves and just do it. We had the ability to do that through the engineering garage (makerspace) and through mentorship from great professors, but just being able to have the tools was really fantastic.”

Mazarakis likened the rigorous academics of Speed School to boot camp, but said the long, tough hours prepared her for her demanding work schedule at NASA.

“You build up this mental rigor for work that is really useful,” she said. “Sometimes at NASA we work around the clock and I sleep under my desk. I really thought that after college, I would be able get a good night’s sleep. It’s a good thing that I braced myself early.”

The definition of a dream job 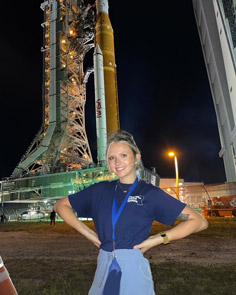 “To say working at NASA is gratifying is an understatement,” said Mazarakis. “My whole life I always wanted to work in space, and then at River City Rocketry I realized that I wanted to build rocket ships. But to be here now actually building them, it’s like I have to pinch myself on the daily.”

Mazarakis said a lot of the testing she performs for her job requires her to climb into the rocket’s crew module to test from inside the rocket.

“Of course, I’m focusing on my work when I’m in there but mentally I’m so excited saying to myself, ‘I’m in a rocket, I’m inside the rocket.’”

What is next for the young NASA engineer?

“I feel like I just achieved my ultimate dream, my ultimate goal just two years ago, so to me it feels weird to be thinking ahead right now,” she said. “I’m just so happy to be here where I am.”

What about the idea of Alora Mazarakis, astronaut?

“It is a lofty ambition and I think I will apply the next time a spaceflight class opens up,” she said. “Do I think I’ll get chosen? Probably not, but I would definitely try. If the opportunity arose, I would gladly, gladly accept – I’ll put it that way.”