The Faculty Senate met Wednesday in Chao Auditorium, where President Neeli Bendapudi provided an update on the KentuckyOne Health properties and the Council on Postsecondary Education president’s visit to campus earlier this week.

“I feel very, very confident and optimistic about where we are as an institution,” she said. “On the HSC front, we are able to accrue savings faster than I thought we would. We need to be able to say we are delivering on what we are promising, so this is good news.”

Because of this, Bendapudi noted in a campus-wide email sent Thursday that UofL has requested a smaller loan for the facilities – from the original $50 million to $35 million.

“We are anticipating a procurement savings of more than $7 million annually and we will make operational reductions of nearly $10 million after year one,” she said.

This loan request will be up for a vote in Frankfort during this legislative session.

Boehm also noted that the student well-being committee has met to talk about what faculty members can do to help students be more successful, both academically and personally.

“Students have a lot of roadblocks to work around and we need to try to reduce those,” she said.

Other committees up and running since the semester started include:

Mark Watkins, senior associate vice president of Operations, and Gary Becker, assistant director of Parking Administration, provided an update on upcoming construction on the Belknap Campus. Starting in May 2020, construction will begin on a new residence hall where the Miller Hall parking lot currently sits. This new residence hall is scheduled to open in August 2021. The existing Miller Hall will be demolished in May 2022.

In May 2021, Threlkeld Hall will be demolished and construction will begin on a new residence hall at that location in June 2021. It is slated to open August 2022.

These construction projects are facilitated through $90 million funded from the state.

Additionally, as part of that phase one construction, the Cultural Center will be torn down and rebuilt.

A brief update was provided from the benefits design work group, which meets in February. In the meantime, the employee benefits guiding principles are posted online here.

Second readings were held for a bylaws update for the School of Dentistry, and more extensive update for the Speed School of Engineering’s personnel documents, including a new code of conduct. Both were approved.

There was no report from the Student Government. The Staff Senate report from December is available online here and includes a budget update from CFO Dan Durbin. There is no January meeting for that body.

Faculty Chair Krista Wallace-Boaz announced that Kevin Gardner has been named executive vice president for Research and Innovation effective Jan. 27 pending board approval. Gardner comes to UofL from the University of New Hampshire, where he served as vice provost of research.

Wallace-Boaz also presented a timeline for the provost search, expected to ramp up in late February with airport interviews. Three to five individuals will be brought on campus in March and April, and a final committee meeting will be held in April.

The Student Success Center has created a group for campus partners to discuss initiatives regarding first-generation students. Areas of discussion include potential collaboration, prevention of redundant programming and unique obstacles this population faces.

The next Faculty Senate meeting is Feb. 5 in Chao Auditorium. 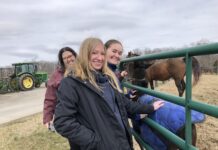