“We have something here,” Cosby told an audience Monday at Chao Auditorium during the opening event for State of the University Week at the University of Louisville. He said Simmons college has become, in terms of percentages, the fastest-growing college in the state, doubling  its enrollment from 145 students to more than 300 since last spring.  Most of the students are African Americans from the city’s economically disadvantaged West End.

The school’s success, he said, is in large part due to its partnership with UofL, which allows Simmons students to transfer up to 64 credits so they can continue their education. Simmons also recently received approval for its programs form Kentucky’s Council on Postsecondary Education.

Cosby traced Simmons College’s history from the day when 12 former slaves officially opened its doors in 1879 as the Kentucky Normal Theological Institute to today, when the school takes its name from a former president, W.J. Simmons. The school wants to seek SACS accreditation and in the next few weeks will be named the 107th historically black college in the United States, Cosby said.

State of the University Week activities will continue Tuesday, Sept. 16, with a breakfast reception for new faculty at 8 a.m. in the Abell Administration Center on the Health Sciences Campus. The university will honor outstanding teaching, service and research at the annual Celebration of Faculty Excellence Tuesday at 6 p.m. in the Brown and Williamson Club at Papa John’s Cardinal Stadium.

Activities will pick up again on Thursday, Sept. 18, with the opening of the flyover bridge into the Belknap Engineering and Applied Sciences Research Park.

Events will conclude Thursday evening with The Spectacular.

The Spectacular will begin at 6 p.m. with a campus-wide buffet dinner on the Natural Sciences Lawn that will feature picnic-style fare, a popcorn bar, mocktails (non-alcoholic cocktails) and flavored sodas.  The event also will feature family-friendly activities, such as inflatables and midway games.

Activities will continue with concerts on the steps of Grawemeyer Hall. The UofL Orchestra, Black Diamond Choir and the Cardinal Singers, one of the world’s top-ranked choral groups, will perform from 7:30 p.m. to about 8:30 p.m.

As the sun sets, the curtain will rise on the highlight of the evening – a 3D presentation utilizing sound and video projected directly onto Grawemeyer Hall. The presentation will tell the story of the university including its history, significant people and events, athletic accomplishments and campaign success while entertaining the audience with music, lights and stunning visual effects.

For a full list of State of the University activities, including a preview of The Spectacular, go to: www.stateoftheuniversity.com. 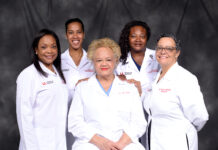