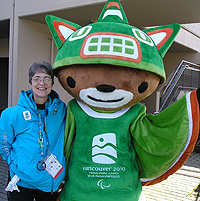 It is no coincidence that Hums had her photo taken with Sumi. The 2010 UofL Trustees Award winner has worked at the Paralympic Games in Atlanta, Salt Lake City, Athens and Vancouver. She was drawn to the world of disability sport through personal experience with a friend who became disabled after a cycling accident and through a coworker who ran a weekend sports program for children with disabilities.

Hums also has Olympic experience in Athens, and what she learns going out working in international sport, she brings back to the classroom for her students. That’s one of the reasons, she said, that she does it.

But Hums does more than just work in the field. She effects change. As a research fellow at The Center for Sport and Society at Northeastern University in Boston, she helped to write Article 30.5 of the United Nations Convention on the Rights of Persons with Disabilities. The document applies to hundreds of millions of people around the world by requiring countries to allow people with disabilities to participate on an equal basis with others in recreational, leisure and sporting activities.

UofL Today caught up with her recently and asked about her teaching and her activities.

You have said that you do Paralympic and Olympic work so you can bring your experiences back to your class. Why?

Sport management is a very hands-on discipline. (It’s the business side of sport.) Our students really need to learn the practical application of the theory. Bridging theory and practice to me is very important. Our students are going to have to go out and ‘do.’ This is a ‘doing’ degree.

Tell me about your work with the United Nations.

In addition to working here, I’m also a research fellow at Northeastern University in Boston at The Center for Sport and Society, where I helped found the Disability in Sport program. The center has a strong international reputation, and was contacted about working on the Convention on the Rights of Persons with Disabilities. I worked with Eli Wolff, and was a co-contributor to Article 30.5, which deals with sport and physical activity.

It was approved by the (United Nations) General Assembly in 2006 and it was ratified in 2008 when they got the required number of signatory nations. Then it took the force of international law. The United States signed it after the Obama administration came in. It was a great feeling to see the United States become a signatory after so many other nations had already done so.
I have worked with a number of major international projects, but that  one for me was my proudest. I think that there are 600 million people in the world who identify as having a disability.

As a professor, we write journal articles and we do it for promotion and tenure. How many people read the articles? I don’t know. But the Convention has the potential to affect the lives of 600 million people. To me that’s impact factor. You will never find my name anywhere on that document. I don’t care. I put my head down on the pillow at night just fine.

What does it mean to them? The 600 million people. What difference will it make in their lives?

I think the Convention signifies hope. Maybe someday, because Article 30.5 is in there, there’s  a young girl in Uganda and she gets a soccer ball — a real soccer ball and not the ones they make with paper and tie them together. And she’s got a disability. It’s the first time ever that she’s been able to kick a soccer ball around with the other kids. Now she goes to school — and learns. She’s bright. Her sport opportunities helped her develop some self-confidence, helped her develop those good things say come along with sport that enable her to do better in school. Who knows where she’ll end up?

Maybe someday she’ll go to med school. And she’ll go back to Africa and help girls with AIDS learn how to live their lives — or help those girls never to become HIV-positive in the first place.

Maybe it’s too much to think kicking a soccer ball can do that, but I don’t think so. I think it starts like that. To me it gives hope.

Another thing it does is it gives visibility. In many nations, people with disabilities are hidden away. You get them out where they’re playing sports, being active and not only is it good for them, but other people see that, too. The kid who stepped on a land mine last year doesn’t have his leg, but now he’s playing soccer. He can do that where before maybe he sat on the corner and begged. He’s playing soccer, interacting with other people.

So I think it gives people hope.

I can’t help but think this has to be a recurring theme in your classes.

It is. Not just in my classes, by the way, but across our Sport Administration program we try to instill in our students these ideas of social justice, of sport and corporate social responsibility. We’re starting to infuse that more and more across our curriculum.

Anita Moorman is our legal scholar. She’s our sport lawyer — a Supreme Court sport lawyer, I might add. She’s admitted to the bar on the Supreme Court. She wrote an amicus curiae (friend of the court) brief on behalf of Casey Martin, the professional golfer with a disability who challenged the PGA so he could use a golf cart during competitions. She can talk about that in class, about writing a Supreme Court brief — wow — in this context.
Dr. Alex Lyras has run Sport for Development and Peace programs back in his home country of Cyprus. Cyprus is a divided nation, divided between the Greeks and the Turks. You’ve got walls there like you see in the old Cold War days. His program brought kids from both sides together to teach them about conflict resolution and decision-making. So he brings that to his classes.
Dr. Chris Greenwell is our sport marketing expert. In his classes the students discuss cause-related marketing as well as ethical issues related to sport marketing.
I think we do a good job programmatically of bringing this information to our students, and I think that’s kind of a niche for us. Our students get something other sport management students around the country don’t get. I think that’s pretty cool.
Sport finance is important, sport economics is important. There’s more to sport industry than that. Even though we’re the business side of the sport industry, corporate social responsibility in sport is an important lesson for our students to learn.