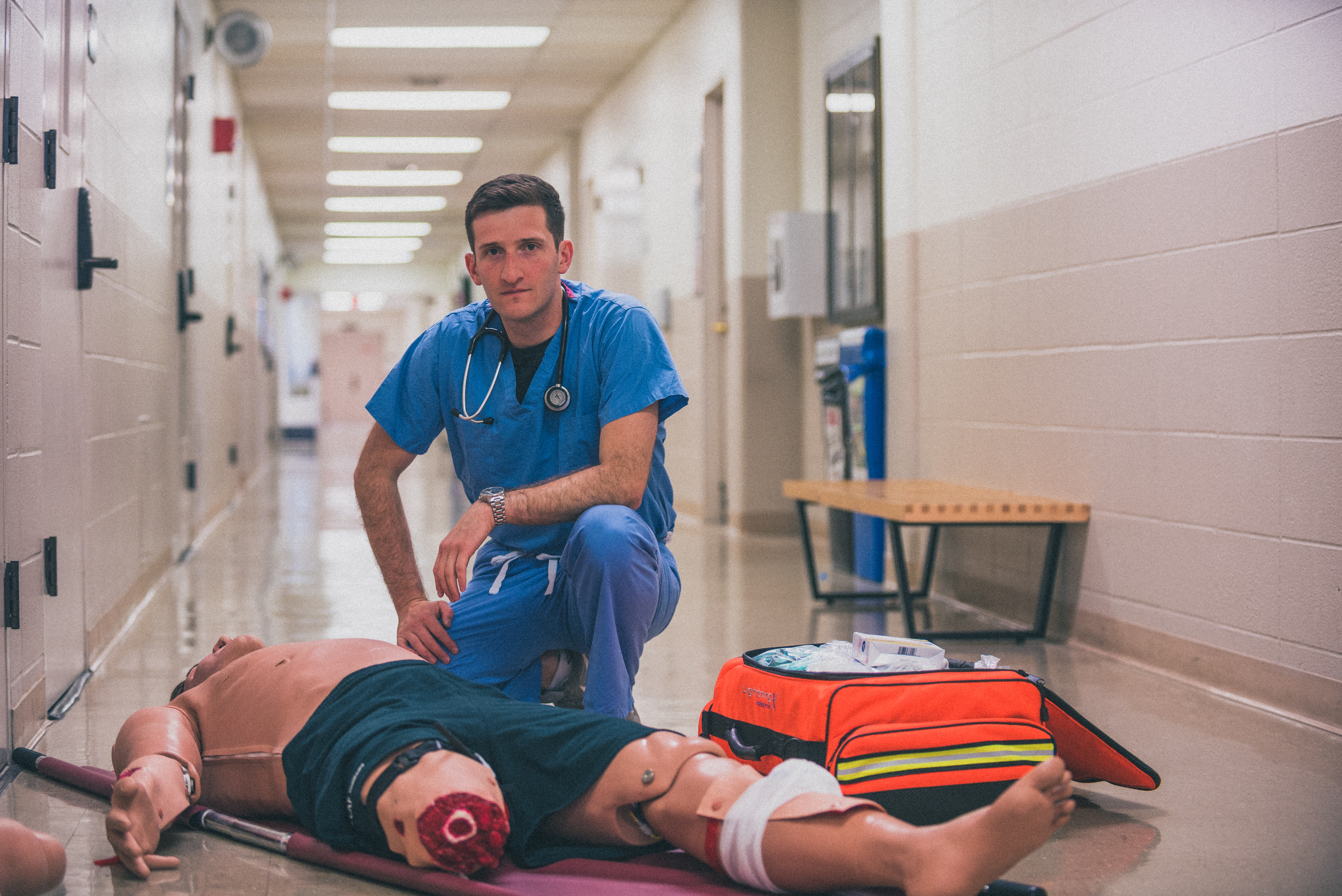 When the first explosions and gunshots echoed across UofL’s Health Sciences Center, fourth-year medical student Madison Kommor almost forgot they were simulated. The sounds were deafening, he smelled smoke, and his adrenaline spiked. As the scene unfolded, he saw SWAT team members running across the downtown quad, shooters aiming at passers-by and actors playing victims falling to the ground.

But most importantly, he saw UofL medical students putting their training to work.

The drill took a full year of planning for Kommor, who completed it as the capstone project required for his medical school program. It was also the culmination of a two-year certificate series he started to train medical students for mass casualty disasters. That series, created in tandem with associate professor of pediatrics Bethany Hodge, director of the Global Education Office, is the first such published certificate series for medical students in the country and perhaps the world.

“No one is learning this and everybody wants to learn this,” Kommor said. “It is not in any standardized curriculum — or very, very few. And a majority of people going into med school today feel like this is supposed to be part of the job.”

Disaster medicine, a specialization that teaches care for injured patients and medically related disaster preparedness, is often taught when physicians reach their residency. But as mass shootings and natural disasters, such as the 2017 hurricanes in Puerto Rico and the Caribbean, became more prevalent, Kommor and Hodge decided they could fill an educational gap for medical students.

“We wanted our students to become familiar with this world that’s out there,” Hodge said. “To feel more comfortable as a physician and to know this is our role and how we can help.”

“It was kind of a tragic coincidence that a lot of mass shootings occurred right when we were starting this,” Kommor said. “The Vegas shootings, the Parkland shooting. A lot of medical students were sick of sitting in the library, getting another text about a mass shooting and realizing ‘I have no idea what I would do if that happened here.'”

More than 130 students took part in the certificate series, which is now the medical school’s largest supplemental program. To earn the certificate, students attend training sessions and lectures from community agencies including Louisville Metro Police, Louisville SWAT, first responders and fire departments, specifically centered on how medical personnel fit into disaster response. Kommor also trained a group a medical students to lead the series with Hodge after his own graduation.

For the drill, Kommor developed a mass shooting scenario and adapted a plan from a Federal Emergency Management Agency training that he and Hodge attended. Forty UofL students portrayed victims, complete with movie-quality wound makeup, while more than 20 students acted as medical personnel. Eleven agencies, including first responders from LMPD and EMS, also participated, making it one of the largest scale drills that the city has seen.

“It definitely changed some perspectives,” Hodge said. “To be able to see what would we as a community do if something like this happened at Derby? Or what if it’s something like Hurricane Katrina where there are fires and floods city-wide? We all feel this innate responsibility to learn our skill sets.”

For Kommor, the training was more than just technical, it was personal. Like many physicians, Kommor got into medicine because he wanted to make a difference. He also wanted to ease the unrest he felt when he would hear in the media about yet another a tragedy, and he knew he wasn’t alone among his peers in those feelings. As Hodge pointed out, doctors don’t like to feel powerless.

“Even as far back as Sandy Hook, it was like the whole country was feeling an overwhelming sense of restlessness,” Kommor said. “It all comes from fear. What I wanted to do with this certificate was to say if you come to this, you’ll be one little bit better, one little bit farther away from that feeling of hopelessness you had before, and you’ll at least have an avenue to be a little more prepared.”