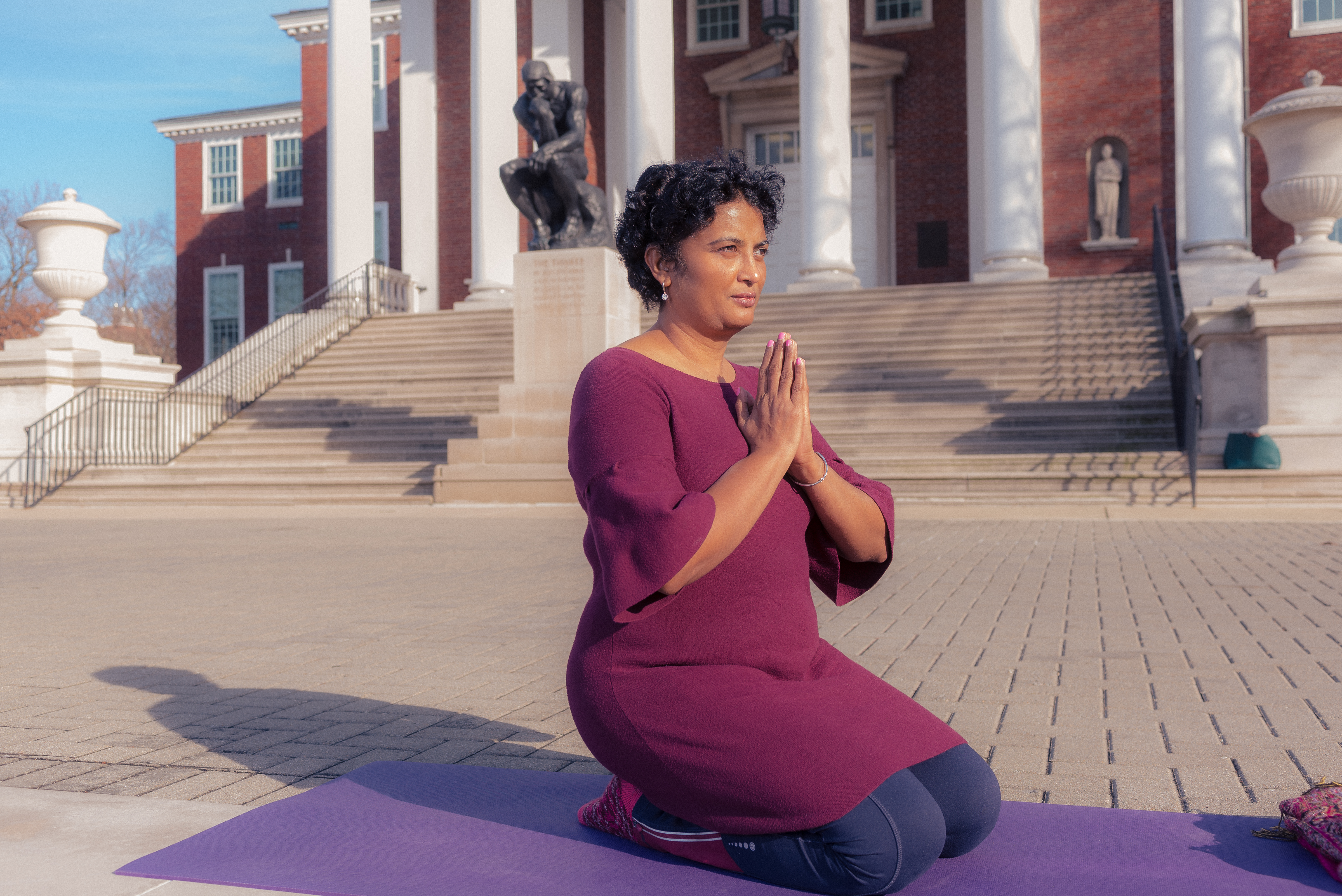 University of Louisville researcher Meera Alagaraja believes yoga brings people together. It’s something she first noticed while teaching youth yoga as a doctoral student. She remembers two high school student yogis from different cliques speaking for the first time, though they had been in the same classes since grade school.

“I always think yoga lets us put down our guard and be a little freer and make connections,” said Alagaraja, an associate professor in the College of Education and
Human Development. “It really connects us to those around us.”

And, as it turns out, those connections run particularly deep in Louisville. In a recently published paper, Alagaraja highlights forgotten historic links she’s discovered between Louisville and yoga’s spread in America — a story that connects India and Kentucky, creating an exchange of philosophy, culture and surging feminism that left both forever changed.

“In a sense, the one part of me — the immigrant part of me — I like seeing these connections,” said Alagaraja, who herself is a transplant from India. “The sense of
global community, that’s very real.”

This story begins as all good stories do — with a mystery.

While visiting a monastery in Los Angeles several years ago, Alagaraja was approached by a monk who heard she was from Louisville. There was a poem, he said, that had long been attributed to another monk, India’s Swami Vivekananda – a driving force in introducing the spirituality behind yoga to America – in his collected works. But it turns out, the poem was actually written by a woman from Louisville.

That poem is, appropriately, titled “The Mystery” — or “The Cup,” in the swami’s works — published around the turn of the 20th century by Margaret Steele Anderson. Anderson was a poet, journalist and art history lecturer at UofL.

“Here’s this woman from Louisville, and her work is somehow in the swami’s Complete Works,” Alagaraja said. “And from there, it became my mission to figure out how this misattribution happened.”

She began pulling threads, calling the book’s publisher, tracing Anderson’s family with assistance from the Cave Hill Heritage Foundation and tracking down the lawyer who executed Anderson’s will — but nothing. So, Alagaraja widened the net and began poring over letters, public records and other documents to find other Louisvillians who might have run the same social circles as Anderson. Amid growing support for women’s suffrage and American feminism in the 19th and early 20th centuries, each of these three, like Anderson, had become pioneers in their respective careers ranging from art to science and business.

“I can’t imagine how they would break down those barriers,” Alagaraja said. “How they would fight to be heard and to pursue their passions, in a time when that wasn’t always available to them as women.”

Semple, born in Louisville in 1863, was an anthropologist and geographer, founding an entirely new discipline where the two intersect: anthropogeography. She earned not only her bachelor’s degree, but her master’s, and continued her studies unofficially at a German university, where women were not allowed to matriculate.

Yandell, born in Louisville in 1869, was a sculptor who studied in France under Auguste Rodin — the artist behind UofL’s iconic Thinker statue. Yandell now has her work featured in the Speed Art Museum and beyond. Lastly, Palmer, born in Louisville in 1849, was a socialite, avid philanthropist and businesswoman. Palmer was selected as president of the Board of Lady Managers, a position of leadership for the 1893 Chicago World’s Fair, particularly the Woman’s Building exhibition.

But, Alagaraja wondered, what exactly did these Louisville women – all Anderson’s contemporaries – have to do with an Indian monk?

It was at the World’s Fair that Palmer became linked with a young Hindu, who exposed her to yoga philosophy.

From India, to the World (Fair)

That Indian monk, Swami Vivekananda had been solicited by a king, Maharaja of Khetri,
to travel to the United States for the 1893 World’s Fair. The maharaja saw the World Parliament of Religions as an opportunity to spread his ideas in the West, Alagaraja
said, and he sponsored Vivekananda’s trip.

After a long ocean liner voyage, Vivekananda attended the fair and spoke on Hinduism, spirituality and yoga philosophy — ideas like the importance of connection to the universe and mindfulness still very present in America today.

“And now, it’s a multibillion dollar industry, and many, many people practice it here,” Alagaraja, a practitioner herself, said. “He laid the groundwork with the philosophy and sparked interest, and that really exploded decades later with the practice of yoga.”

Vivekananda also spoke at the Woman’s Building, which Palmer played a key role in planning. The two developed a friendship, exchanging letters back and forth even after the swami returned home. It was likely through Palmer and shared friends, Alagaraja said, that Vivekananda also crossed paths with Semple and Yandell. The influence of his philosophies can be seen in both women’s later writings and works.

There is evidence that Semple frequently interacted with the swami’s followers and was taken with their ideas of spirituality. An accomplished and studied scientist, she wrote in a letter to one follower that those ideas “inspire me too, in spite of my strict scientific training, for I realise that the domain of the spirit is larger.” There also is evidence of the swami’s impact on Yandell, the artist, who would later create a small sculpture described as “an Indian man standing.” In an interview with The New York
Times, Yandell would call the sculpture the “Hindoo” bronze.

“That’s how he sparked that interest (in yoga and spiritualism),” Alagaraja said. “It started as an interest in him, and how he was different from anyone else and it grew from there.”

Of course, the presence of Anderson’s “The Mystery” poem in Vivekananda’s collected works offers some evidence that they crossed paths as well. While that’s a mystery Alagaraja is still working to solve, she says her work so far has still cast light on a little-known piece of Louisville’s past.

Those stories explain Louisville’s connection to the spread of yoga philosophy in America. But, the women had an impact on the Swami, as well, inspiring ideas of feminism he would bring back to India.

Aside from connection, yoga is all about flows — and in this case, it’s influence that flows both ways. While the women learned of yogic thought and Hinduism from the swami, he was inspired by their ideas of feminism and efforts to gain equality.

In the 1890s, when the swami traveled to America, the social hierarchy in India was rigid and gender-driven, with women and men not being able to speak to those of the other sex outside of their own family. When he arrived in America, Vivekananda would have been surprised to see women and men shoulder to shoulder at the World’s Fair and to see women thriving in careers and leadership positions as Palmer, Yandell and Semple did.

This inspired the swami, Alagaraja said, as he understood freedom and equality as being firmly connected to his sense of spirituality. When he returned to India, he continued to speak to the ideas of feminism through his teachings and writings.

“When he goes back to India, he becomes such a champion for women’s rights, and that’s evident in his writings,” Alagaraja said. “Feminism, empowerment, yoga — they all have this connection.”

In letters written to friends in India about his visit to the U.S., Vivekananda said he admired the “broad and liberal minds” of the women he met who expanded his own outlook – and, in turn, the outlooks of his followers and those who still read his works today.

“About the women in America, I cannot express my gratitude for their kindness,” he wrote. “In this country (America), women are the life of every movement and represent all the culture of the nation.”

In July 1896, shortly after his trip to America, Vivekananda founded the journal Prabuddha Bharata, or Awakened India — the very same journal in which Alagaraja’s recent findings were published. In his time, the swami used the journal as a bullhorn to spread his teachings, including those on gender, racial and class equity.

In the generations after the swami, during unrest in India as its people fought for political independence, Alagaraja said, protesters would cite the Vivekananda’s works and ideas of unity and freedom – ideas that overlap with the ideas of the women from Louisville.

“Our right of interference is limited entirely to giving education,” Vivekenanda wrote. “Women must be put in a position to solve their own problems in their own way. No one can or ought to do this for them. And our Indian women are capable of doing it as any in the world.”

Vivekananda would likely be as impressed with another Louisville woman and her work to continue advancing the ideas he and his contemporaries shared: Alagaraja herself, whose efforts to solve this mystery go far beyond her typical university research.

“Innovation these days within universities is critical for stretching our thoughts, words and reach,” said Sharon Kerrick, Alagaraja’s chair and colleague in the UofL department of education leadership, evaluation and organizational development. “Dr. Alagaraja’s discovery of this forgotten part of history is the very definition of innovative and shows how she utilized her traditional inquiry skills, mixed with curiosity and a bold thought process, to trace this fascinating story.”

More importantly, Alagaraja said, highlighting the connections between Kentucky and India, and between the swami and the Louisville women, and between these two seemingly disparate ideas and movements, reveals a universal truth — we are all connected.

“At their most basic level, both (feminism and yoga) are built on the recognition of equality — and the recognition of freedom for not just the physical self but for the spirit,” Alagaraja said. “We aren’t men and women — we are spirit and spirit. We are the same.”

Help solve “The Mystery”: If you have any information on Margaret Steele Anderson or her poem, email meera.alagaraja@louisville.edu.