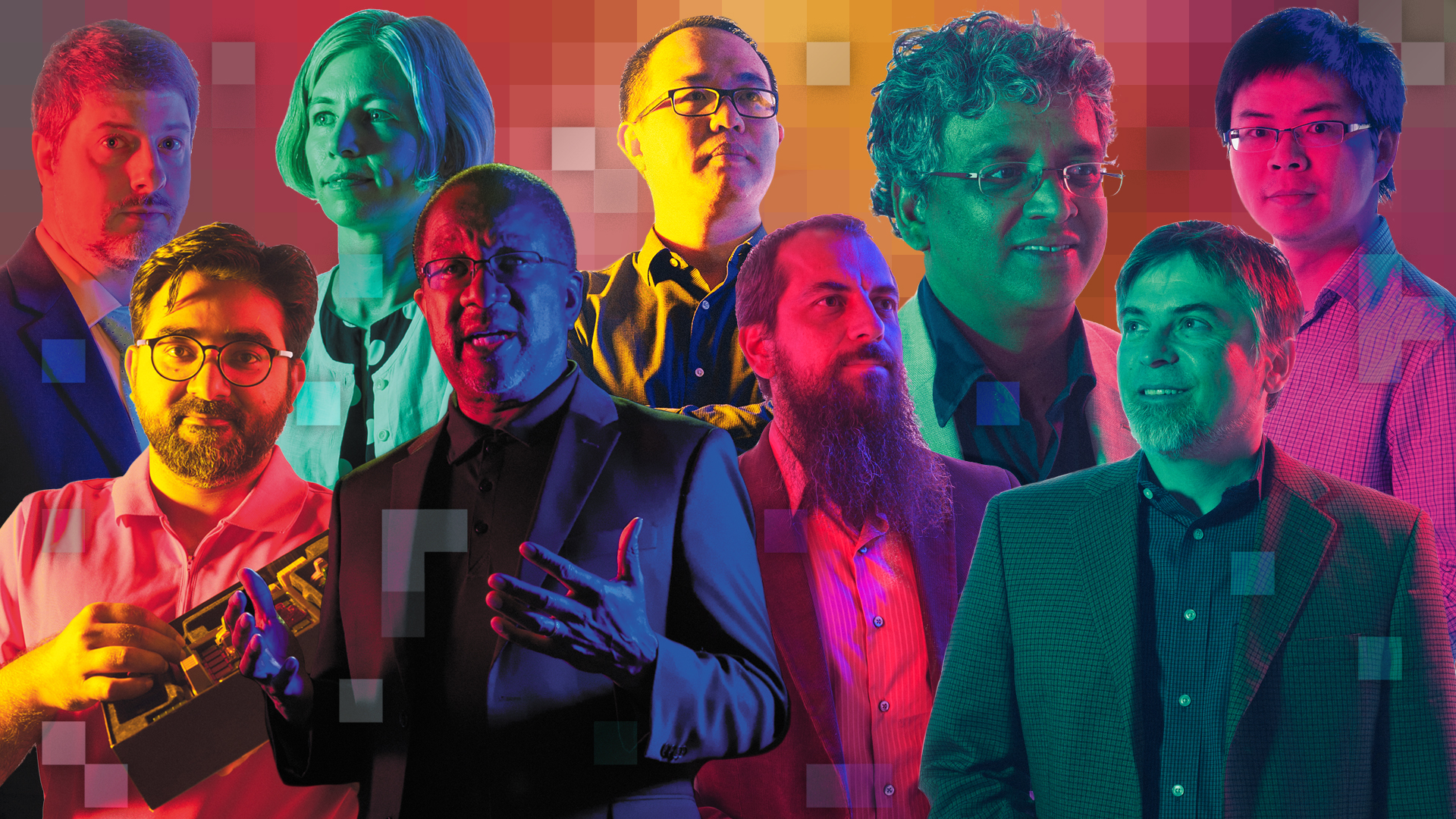 They have the power to create and upset whole industries and change how we live and work. Think shopping before the internet, travel before planes and cars or even cooking before fire.

According to the DaVinci Institute’s Thomas Frey, one of Google’s top-rated futurists, more of these disruptive technologies may be on the rapidly approaching horizon. When he spoke in Louisville earlier this year, he outlined eight of them: sensors, flying drones, driverless cars, 3D printing, virtual and augmented reality, internet of things, artificial intelligence and cryptocurrencies/blockchain.

Here’s how trailblazing researchers, inventors and innovators at UofL are working to advance these technologies.

Sensors
Sensors can efficiently and automatically collect information, such as location, temperature and pressure. Cindy Harnett is using them to build better athletes. She’s invented stretchable, thin sensor technology that can be woven into fabric. The idea is to create smart-technology clothes or wraps you can wear as you bike, run or lift.

“We can track things that have always been happening but we didn’t have the data on,” said Harnett, an associate professor of electrical and computer engineering. “And we can do it without invading people’s privacy.”

Harnett’s technology, patented through UofL’s Commercialization EPI-Center, can measure the strain on muscles during athletic activities — the “player load” — which can tell us about physical limits, form and technique. That’s information we don’t necessarily get from current athletic performance measures.

Outside of athletics, Harnett said sensors have the potential to impact or completely disrupt many industries including manufacturing, public health, logistics and distribution.

Flying Drones
Flying drones can navigate and gather information where humans can’t, such as over large territories or in dangerous, potentially life-threatening circumstances. That ability makes drones perfect for surveillance and monitoring, according to Adrian Lauf, assistant professor of computer engineering and computer science and director of UofL’s Aerial Robotics Lab.

“I’ve always thought ‘what could we do if we take multiple aircraft, attach sensors to them and allow them to be part of the picture?’ ” Lauf said.

Lauf believes drones could inventory what structures are still standing after a natural disaster and look for survivors. In agriculture, they could gauge the health of crops. For major public events, such as concerts or the Kentucky Derby, drones could map traffic patterns.

But for drones to be effective at surveillance, Lauf predicts we would need many, inexpensive bots working together. His lab is studying wireless sensor networks, which would allow groups of drones to work as a team, coordinating navigation and group decision-making, and reporting the information they gather back to a central location.

Driverless Cars
Autonomous vehicle technology is already being explored by everyone from BMW to Uber. Doctoral student Parag Siddique is trying to figure out where and how all of those self-driving cars would park.

He’s especially interested in urban areas, where there are lots of people and space is scarce. Self-driving cars might be an opportunity to use that space more efficiently through automation.

“This doesn’t require new parking lots. It’s a better use of existing ones,” said Siddique, whose work is with the Logistics and Distribution Institute at the J.B. Speed School of Engineering. “All you need is an algorithm.”

Siddique proposes an “automated valet” in smart parking lots that packs cars densely together. His idea was inspired by current warehousing research and a game called “Rush Hour,” where a player tries to remove one car piece from a board of them packed tightly together.

With the automated valet, drivers — er, passengers — would open an app and surrender control of their self-driving car to the lot. The lot would then automatically move the cars into available spots, packing them densely together to maximize space.

3D Printing
Your desktop printer can print words or pictures onto a sheet of paper. But 3D printers can print tangible things, like prototypes, machine parts and even jewelry.

“I see the pathway to a multibillion 3D printing economy in Louisville,” said Atre, a professor of mechanical engineering and endowed chair of manufacturing and materials. “It’s not unrealistic.”

With LAMBDA, launched last year with a U.S. Department of Commerce grant, Atre hopes to make this technology accessible to everyone. The alliance is working to open a business incubator and workforce training center in West Louisville, with the goal of helping minority-owned small businesses innovate and grow.

“The goal is to create a pathway for inclusive innovation,” Atre said. “It’s not where we are now — it’s how far can we go? And how fast are we hurtling toward that potential?”

Hui Zhang is using this technology to untangle virtual knots on a touchscreen computer. It’s a method of teaching mathematics in which computer-generated knots are dynamic, difficult math problems.

“VR allows them to interact with the concept virtually, while learning the mathematical properties,” said Zhang, an assistant professor of computer engineering and computer science.

He’s also using this technology to study human behavior. By pairing a person with a virtual conversational partner, his team monitors eye movements to see when both are paying attention.

“We use this virtual twin to study how we interact with a conversational partner,” Zhang said. “We want to understand the statistical, reliable pattern of
how we reach joint attention.”

Zhang predicts this work could have applications for children with autism, who often have a delay in their ability to reach joint attention. It also could be useful for training in negotiation or customer service.

Internet of Things (IoT)
You may already be familiar with the internet of things (IoT) concept through smart assistants like Amazon’s Alexa or Google Home. When connected with smart devices, they allow users to control other electronics with a simple voice command.

“We want to make everything smart,” said Huacheng Zeng, an assistant professor of electrical and computer engineering.

But to unlock IoT’s full potential, there are still challenges to overcome. For example, there’s only so much radio spectrum available — not enough for all the things we want to connect to the world wide web.

“How can we provide internet access to those devices?” Zeng asks.

Zeng has a career grant from the National Science Foundation to find solutions to that problem. He’s also invented a technology — patent-pending through the Commercialization EPI-Center — that makes the existing spectrum more efficient by allowing devices to share. His invention also tackles security issues by jamming signals that would allow hackers to steal information.

Artifical Intelligence (AI)
Most jobs require a certain degree of intelligence. Whether that intelligence is human or artificial — well, that’s a question for Dan Popa.

Popa is developing artificially intelligent robots that could work in manufacturing or nursing. The latter would serve as a nursing assistant, collecting information and retrieving cups of water so human nurses can focus on more important things.

“The robot that observes the person can document and log data,” said Popa, a professor of electrical and computer engineering. ”But it will not replace human care.”

The nursing assistant robot is patent-pending through the Commercialization EPI-Center. It’s currently being tested at the School of Nursing.

Popa understands people have concerns about artificial intelligence. If this has you worried that robots will come for jobs, don’t. Most robots aren’t reliable enough yet and still need “chaperones” to show them where to go, what to do and keep them out of trouble. And even if robots take over some jobs, Popa thinks they’ll create new ones.

“I don’t believe the predictions that robots will replace everyone,” Popa said.

Cryptocurrencies/Blockchain
You’ve probably heard of bitcoin, one of many currently available cryptocurrencies. These cyber monies are increasingly popular in today’s digital economy as an alternative to tangible money, and they come in all different flavors.

“Some come with interest, some invest for you,” said Roman Yampolskiy, an associate professor of computer science and computer engineering and director of the Cybersecurity Lab. “Each comes with its own perk.”

Cryptocurrencies are built on blockchain technology, which is best described as a ledger spread across the thousands of systems all over the world. It’s an open, distributed and unchangeable log of transactions that encrypts and timestamps when the currency changes hands. That “unchangeable” nature gives the technologies potential uses across industries including banking, health care, media, retail and government.

Yampolskiy is looking at how we can use these transactions to send text and media messages.

“The decentralized nature of the blockchain allows power to be taken from the governments and corporations and returned to the people,” Yampolskiy said. “It is a powerful tool for fighting censorship, privacy violations and asset seizers.”

Preparing for a Social Hurricane
UofL’s own futurist, Nat Irvin, assistant dean for thought leadership and civic engagement in the College of Business, thinks technology will disrupt more than the economy alone. Here, he shares the double-sided storm he sees coming society’s way.

Two powerful forces of the future — an ever-expanding surge in technology and a dramatically different human population — are converging right before our eyes.

In the summer of 2016, I joined a couple of my baby-boomer friends to travel to a small town in Ohio ostensibly to view the remnants of a 2,000-year-old American Indian mound.

It was nearing dusk when we arrived and thus we were quite surprised to see so many young people who had also gathered to observe this part of our American history. But as we began our tour, we quickly discovered the young crowds were not there to see the ancient burial grounds. They were “Pokémon Go” seekers, searching for futuristic augmented reality creatures like Pikachus, Squirtles and Rattatas. While we boomers were looking for the past, this next-gen crowd was searching for invisible creatures of the future that had nested themselves right where we stood.

We could not see the Pikachus, but the teens could. Using the lenses of their smartphone cameras, embedded with smart sensors and GPS coordinates, the mobile game players literally transformed the ancient American Indian burial grounds into a physical-world mirror image filled with virtual creatures. The fervor around “Pokémon Go,” which swept the globe in 2016, has somewhat faded but the underlying convergence of the real world colliding with the virtual world was only the beginning.

As artifical intelligence (AI) becomes cheaper, we can expect our existing physical structures will be impacted by some aspect of augmented reality. Our computers will start to disappear, replaced by smart sensors embedded not only in our physical structures such as buildings, roads, cars, homes or centers of faith, but also in the clothing we wear, our shoes, the food we consume, diapers for our newborns, latrines that collect our waste, trees that we plant, pets that keep us company. Even our physical bodies will be transformed with some variations of smart sensors.

But that’s not all. The crowd of teens we witnessed that summer of 2016 also reflects a change in the human faces who might seek the Pikachus of the future, virtual or real. By 2020, the entire population of those under the age of 18 will be majority non-white, the entire age 30 and under population will also be majority non-white. Within 10 years, all of our existing structures — and their supporting institutions led by humans — will undergo dramatic changes, both virtual and real. We will experience a social hurricane.