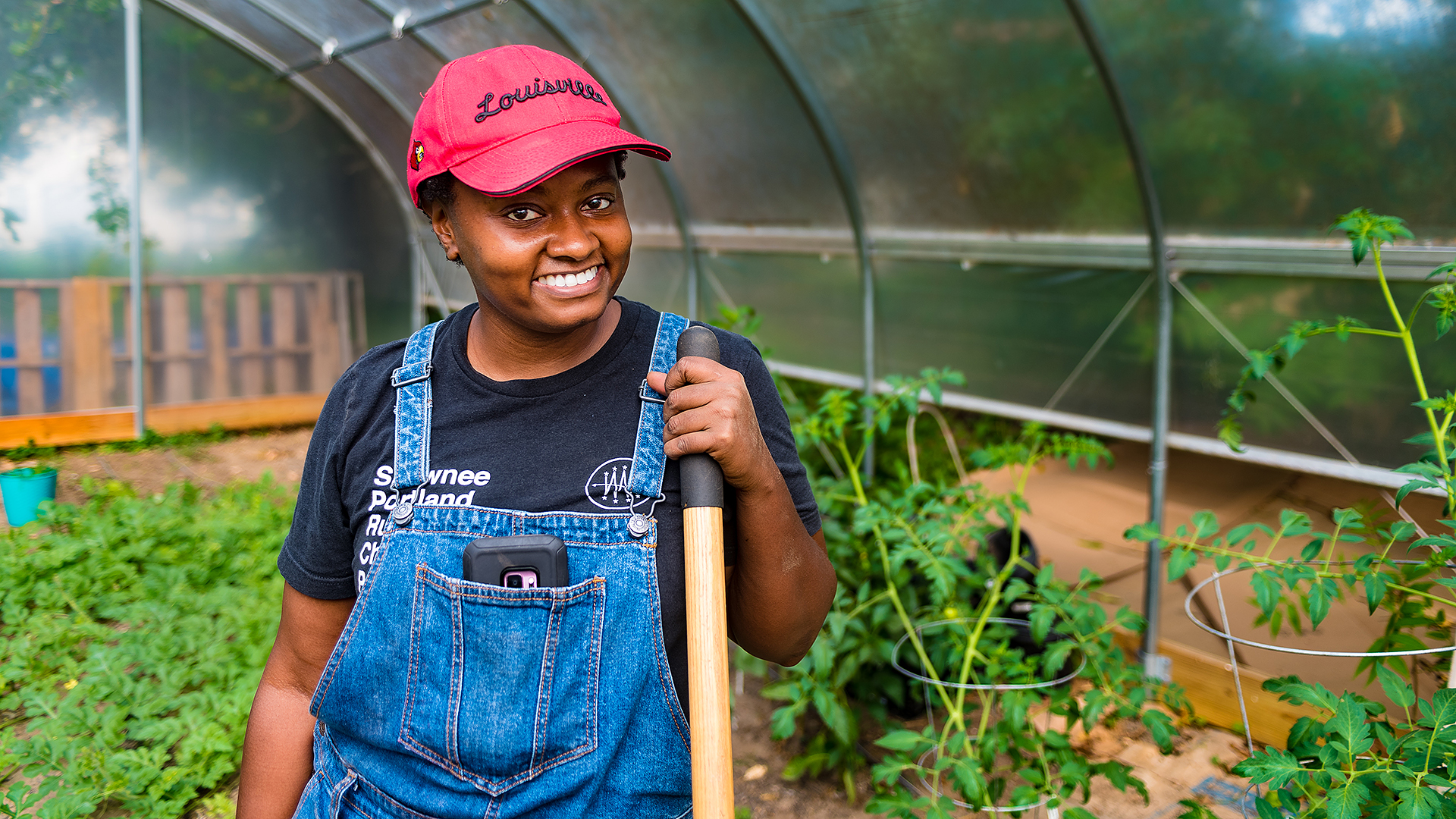 UofL alumni are growing a movement – or rather several – to address food insecurity in Louisville from the ground up.

Whether by planting seeds, sharing yield or trying to launch grocery stores where they are most needed, several local women are tackling lack of access to fresh, healthy foods in parts of the city.

With heightened concern born of the pandemic or accelerated by months of protests against racial injustice, the women are taking action in the community to allay hunger and increase the availability of choices as well as to empower others. They agree that people shouldn’t have to leave their own neighborhoods to find nourishing food or affordable groceries and that Black-owned businesses should have a chance to be suppliers as well.

Since the COVID-19 pandemic and its related shutdowns or slowdowns, food insecurity is on the rise, says Lisa Markowitz, a UofL associate professor of anthropology who has developed several food justice and farm movement courses. “It’s hitting low-income communities and people of color at a much higher rate. People are not able to get out and about, and people are losing income,” she said.

Mariel Gardner ’03 got into raising plants as a side job growing cucumbers to launch a pickle business. But a week after the stay-at-home order related to COVID this spring, she and her gardening partner shifted direction.

“We can’t profit off this. We have to feed people,” Gardner said.

Gardner operates two greenhouses on formerly vacant lots where she grew more than 200 pounds of produce in a chemical-free manner and gave “the vast majority of the food away to people who live on the street.” This season included collard greens, carrots, zucchini, kale, corn and tomatoes; Gardner said she hoped they learned enough this year to double or triple next year’s yield.

She initially called the operation Apocalyptic Acres in a nod to the unusual time, but the title evolved into Fifth Element Farms. The choice comes from the fifth element of hip-hop culture: knowledge. Besides playing hip-hop music in the greenhouses, they chose the name to harken back to history.

“We are using the knowledge of our ancestors to grow this food for the good of our community,” Gardner said. “It all ties hand in hand with our ancestors, using our ancestral roots to feed the community. I love all these connections being made to the past and the present.”

Just as greenhouses make vacant lots more vibrant and productive, so does her spinoff project. Gardner and friends have been clearing blighted alleys of abandoned tires, which they are repurposing into planters and giving to people with seeds or plants to start their own small gardens.

“I don’t think we’re doing anything revolutionary here in trying to feed our people,” Gardner said. “It’s what we’re supposed to do.”

Sharing her attitude are other alums like Ebonee Sutton ’02, owner of Victory Gardens Urban Farm in the Victory/California Park area, and LeTicia Marshall ’08, ’11 who used her property in Shively to Bear Fruit and Grow, the name of her urban farming operation, and to teach young people and others to connect to their food.

“I wanted my daughter to learn because kids don’t understand where food comes from,” Marshall said.

“We typically think about farms in rural areas,” Marshall said. But her farm is in the middle of a residential neighborhood, where her garden surrounds her house, with produce planted in beds and containers and crawling up trellises. She has expanded yearly with plots, fruit trees and even a small greenhouse replacing traditional lawn space. “I can’t eat grass so I’m going to grow some food,” she said.

Neighborhoods that rely on grocery shopping at corner stores, gas stations and small mom-and-pop operations aren’t getting the full range of options, she said. “There’s very little access to fresh vegetables and berries.” So Marshall shares her bounty with the community.

A neighbor has agreed to lease a yard to her for $1, and “whatever I’m growing, they can go pick.” Her plans include purchasing items to extend her growing season and one day operating a nursery. “I do want to be the first Black-owned seed company in Louisville,”
she said.

Gardening this year has helped bring Marshall some peace and nudged her into more action. Marshall’s psychology and social work degrees help her coach others on gardening techniques and seed collection, emphasizing the cycles of harvesting and planting again for a new season. Like she experienced, people can find purpose in reclaiming their spaces and taking action, and they can take pride in growing their own food.

“What I found out was I am doing social work, just in a different way,” Marshall said.

Shauntrice Martin, an associate alumna, was spurred into food outreach when the pandemic intersected with protests over law enforcement and racial inequity. The Parkland resident began #FeedtheWest with the organization Change Today, Change Tomorrow. #FeedTheWest distributed 23,000 food care packages in four months with at least $85 worth of groceries per bag, she said.

The assembling of the weekly food bags will continue in a new spot – her Black Market KY grocery store set to open soon in a 1,588-squarefoot renovated pizza business on a Market Street corner in the Russell neighborhood. It will be the only grocery store in the immediate area.

Martin has designed a place where neighborhood people can walk to or take a bus to buy fresh produce as well as a few household items – where they can afford and access items she feels they have been denied since larger retail stores closed and have not been replaced.

With a goal of providing 60 percent fresh food, Martin said she wants her customers to be “getting high-quality food for a low price.” She plans to hire only people who live in West Louisville and to raise funds to cover workers’ child care and transportation costs.

Intending to also use her surrounding half-acre, Martin envisions a social place where local children and seniors attend gardening education on plots next to or behind her store. Already she has encouraged Black-owned businesses to operate pop-up shops in the parking lot while construction continues.

Community organizer Cassia Herron, chairperson of the justice organization Kentuckians for the Commonwealth, also is focused on starting a grocery. Her efforts are for Louisville Community Grocery, which is being developed under the nonprofit Louisville Association for Cooperative Economics (LACE). Markowitz serves with Herron on the LACE board; alumna Kelsey Voit ’17, organizing director of the Community Farm Alliance, is president of the Louisville Community Grocery board.

The co-op business would be run and owned jointly by voting members who share benefits, profits and decision-making. Members become owners by purchasing shares priced affordably or subsidized to encourage local involvement. There were more than 250 owners by early fall, and Herron wants 2,000 by the time the store can open. The group was working to select a site and should complete its business plan by the year’s end, she said.

Herron ’02 has been working on aspects of food availability since organizing farmer’s markets while earning her bachelor’s degree in liberal studies. Connecting with UofL faculty and student researchers from areas including law, sociology, anthropology and business helped develop various aspects of LACE’s growth and helped set the stage for the grocery effort. “The university has been great,” Herron said.

As a faculty member, Markowitz encourages her students to get involved in food activism, volunteerism and related research opportunities. “It’s exciting to see the way students engage in the material and learn so much, using their knowledge and skill set to make change,” she said.

One of Louisville Community Grocery’s lead volunteers, Avalon Gupta VerWiebe ’19, recently spread the word about food access through an on-campus talk at the Garden Commons sustainability site. Instead of using the term food desert to describe the access problem, Gupta VerWiebe prefers food apartheid as a more apt description.

“Food apartheid looks at the whole food system – agriculture workers, grocery workers, proliferation of grocery stores, farmers’ markets,” she said. “The inequities in the food system are intentional and informed through inequality.”

Gupta VerWiebe urged students to take action to bring about “food sovereignty” instead. “I think the sky’s the limit,” she said. “Now’s the time to contribute ideas.”

“Having access to food is pretty essential,” Herron said. “If we are a community that cannot feed our people, I don’t know what we can do. Our community needs a win. I hope it’s a spark that ignites other wins in the community.”