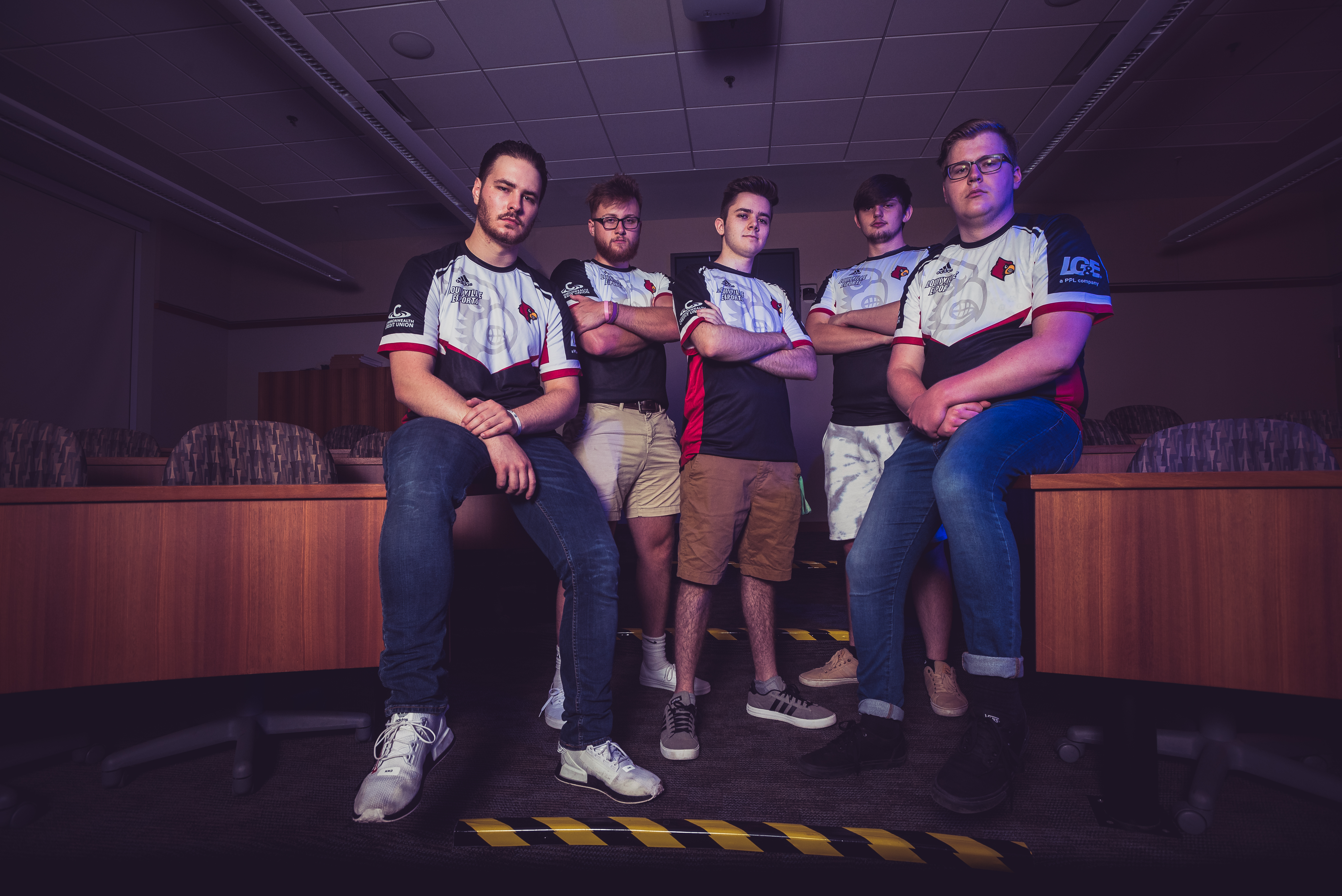 Competitive video gaming, also known as esports, has been on the rise for several years. With 20 million fans in the United States alone and a 15% year over year increase, it’s safe to say the once-niche interest is here to stay.

Through the pandemic, as people around the world searched for something to occupy time at home, the esports community boomed.

“Some people watch movies, some people go to the gym and some people play games as their outlet and I think that’s true for many of our students,” said Louisville Esports Club staff adviser Matt Banker.

In 2020, more than 14 million college students played video games — whether casually, socially or competitively — averaging about 8.2 hours spent gaming each week. Students at UofL are no different. In fact, nearly 200 students have found a home in the up-and-coming Louisville Esports Club.

But esports are more than a game. There are major benefits to being involved in collegiate gaming. For example, the National Association of Collegiate Esports has provided more than $16 million in esports scholarships and aid to players.

And with more than 50% of esports players interested in STEM (science, technology, engineering and math) majors, according to GYO Score, a thriving UofL esports program can provide a unique, well-rounded experience as students prepare for jobs after school.

“The UofL esports co-curricular program opens up opportunities for students interested in careers such as sports management, gaming and computer science,” said Lori Stewart Gonzalez, executive vice president and university provost. “Joining the team is a great way to get involved with other students while honing computer skills.”

Though UofL’s Esports Club has been in existence for several years, it wasn’t until the current club president Braden Hensley’s freshman year that it really took off.

As part of an assignment for an English class in spring 2018, Hensley had to write about something he enjoyed. For a person who grew up playing video games with two older brothers, esports seemed like the simplest choice.

“Collegiate esports was kind of becoming a thing,” Hensley said. “I did a bunch of research on it and realized that this was going to be the real deal. I reached out (to the club at the time) and they said they were going to be closing down the club because of a lack of interest.

”Hensley saw the way esports was growing and knew that the club had potential. He knew how much he and his peers enjoyed playing video games, so how could there be a lack of interest?

His “simple choice” for a freshman English assignment morphed into a multiyear endeavor as he dove headfirst into the club’s growth as its president. That summer, the mechanical engineering major reworked the club’s constitution and entered the fall semester with the goal of creating an inclusive gaming space for students at the university.

Open to students with a variety of abilities, experience levels and interest, the club quickly grew as its leaders focused on building community.

“In the last three years we’ve had a new wave of interest from students,” Banker said. “We’ve used that time as an incubation period to learn and develop our priorities. We have two prongs to this — the competitive side and the casual gaming side for those who want to get together for fun on a Friday night.

”Although the in-person game nights have ceased over the last year, students have been able to stay connected through the club.

Meetings and competitions were hosted virtually and the club has amassed roughly 600 members on its Discord server, a group chatting app popular among the gaming community.

“It’s nice to be able to have a place to go to chat and ask if anyone wants to play (a particular game),” Hensley said. “It’s nice for those of us who can’t get to campus but want to interact.”

While the club attracts gamers of any level, about 50 members are involved in year-round competition against club teams from other institutions. With competition ranging from dual meetings to highly visible tournament play, the Cardinals have found quite a bit of success.

“We played five games – League of Legends, Rocket League, Valorant, Madden and Minecraft – and won three,” Hensley said. “That was a big win for us and it bridges the gap between gamers and other college students because they understand the rivalry.”

The club also bridged that gap by hosting a collaborative Madden NFL 2021 event with Learfield, which has invested in esports nationally. The tournament brought UofL fans, alumni, students, faculty and staff together to apply their football fandom to competitive gaming, and it also attracted attention from a noteworthy former Cardinal athlete.

“Lamar Jackson, who is on the cover of the game, was cool enough to tweet about the tournament,” Banker said. “Ironically, the championship game teams were the Green Bay Packers with Jaire Alexander and the Baltimore Ravens with Lamar Jackson.”

Aside from the camaraderie and competition, there are more demonstrable benefits for universities to host esports and even to make them part of curriculum.

“The growth of esports has directly impacted our enrollment numbers, helping to make our computer science and engineering department one of the most popular majors among our incoming freshman class,” said Jonathan Hughes, director of admissions for the J.B. Speed School of Engineering. “Our students are not only interested in gaming but interested in learning how science and math can take the world of esports to the next level.”

Student interest also has driven the Speed School to develop degree programs that merge various academic passions, Hughes added. Starting in fall 2021 (pending Council on Postsecondary Education approval) UofL will offer a Bachelor of Arts in Computer Science for students who want to combine their love for computer science with other majors like art design or a similar field. The degree could widen their knowledge and skills, better preparing them for careers in game design, for example.

“If I wanted to take my mechanical engineering degree and apply it to esports, trying to do both at the same time, there’s a lot of up-and-coming tech,” Hensley said. “Virtual reality can use hardware designs; it could definitely help me out going that direction.”

Hensley plans on blending his passion for esports and engineering, but whether a student is interested in using gaming to explore STEM career options or just playing Madden NFL, Rocket League or a classic like Mario Cart, he said the Louisville Esports Club has a home for them.