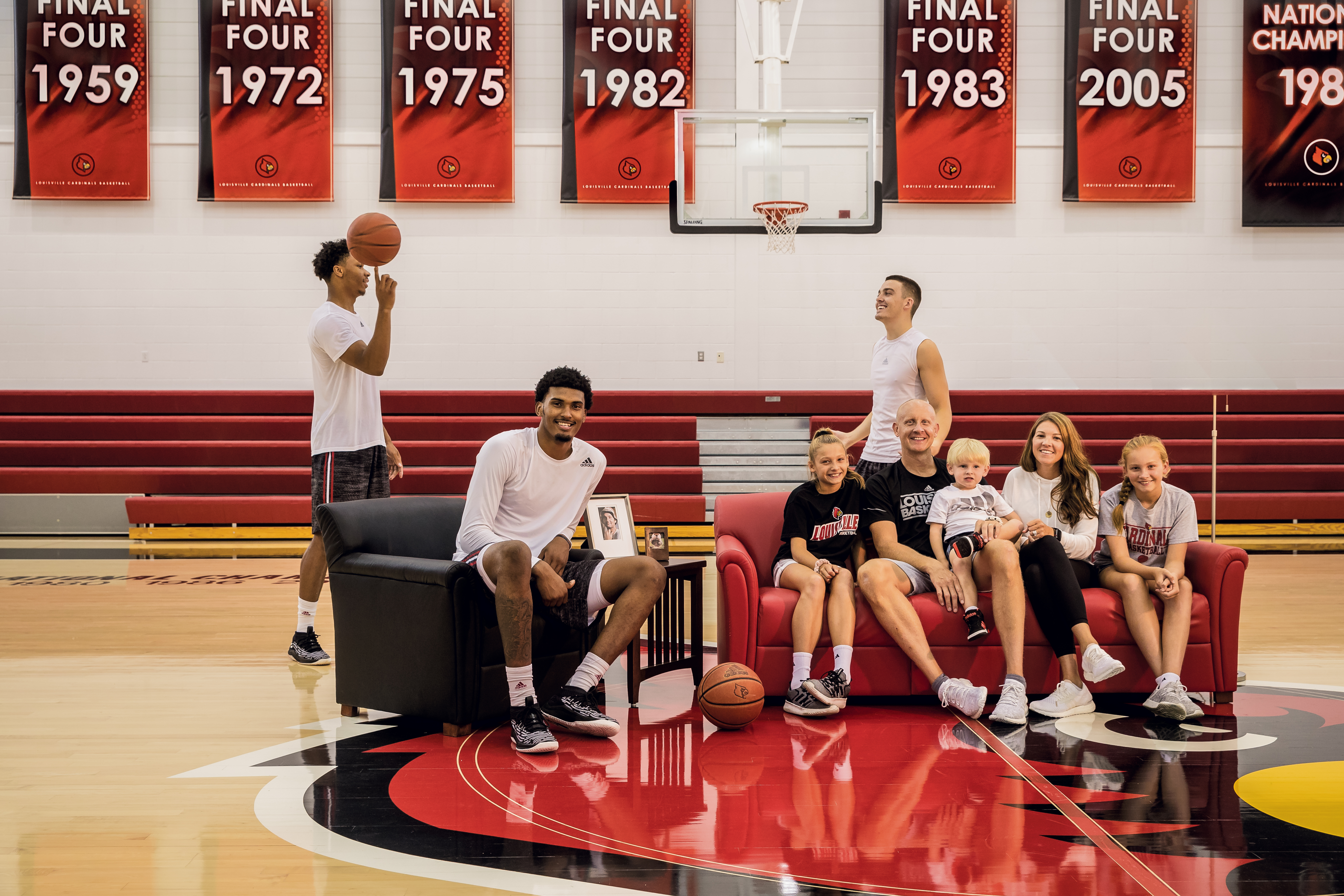 On an early fall day at the Yum! Center practice facility, the men’s gym is filled with sneaker squeaks and men’s basketball head coach Chris Mack’s booming voice. Players including Dwayne Sutton, Ryan McMahon and Malik Williams are getting in a preseason workout.

While one Mack holds court downstairs, his second-floor office is filled with other Macks: his wife, Christi, is seated at his conference table; 13-year-old daughter Lainee is working on homework; 12-year-old daughter Hailee is sitting at dad’s desk. Three-year-old son Brayden is down the hall with his grandparents, trying out  treadmill in the players’ workout room.

When Louisville Basketball hired Mack in March, it got a dual threat — an elite coach who could lead a storied program back to the NCAA Tournament and a devoted dad who would set a good example for players. The combination has led to a renewed sense of stability for the Cardinals players, a boon in recruiting and an environment that breeds high expectations for the season.

The blending of his Cardinals team and Team Mack into one Brady Bunch-style basketball family is a priority for the coach, whose ultimate goal is the same for his kids as it is for his players — success.

“I don’t want to have that work-family life balance. Balance infers that you’re on one side of the scale and the other side is either drooping or rising. I want them to be sort of intertwined,” he said. “Raising my kids in the right way and being a role model for the players that I coach; I want to be able to live that for my team and show them that you can do both.”

Basketball has always been a big part of the Macks’ lives. Chris Mack spent his college career at the University of Evansville and Xavier University and coached at Wake Forest before returning to Xavier as head coach. His wife was a basketball standout at the University of Dayton. Their three kids are just as comfortable in a gym as they are at their house.

Because of their mutual love for the game, it’s no surprise that Christi is willing to go all in when it comes to sharing her husband with 13 players, several assistant coaches, a rabid fan base and countless recruits.

“Sometimes we really have to work at it, but it’s something that’s important to both of us,” Christi said. “I love basketball and I’m not going to sit back at home. We’ve been fortunate to be at universities that are really accepting of our family being around.”

So Christi, Lainee, Hailee and Brayden have become fixtures at the basketball offices and on the sidelines. Watching Mack interact with his family has given his players a lot of insight into their new leader.

“The way he treats his kids is a lot how he treats us,” said McMahon, a redshirt junior. “He expects a lot out of us. It makes you want to go hard for him every day because you know he truly cares about you. It’s not like he has just three kids at home, he also has 13 kids here.”

“I think the best teams in any sport care about one another,” Mack said. “They play for one another. They sacrifice for the greater good of the team, and that’s not always easy to do in 2018 when so much is self-promotion. There’s a trust level that goes into sacrificing some of those personal things for the team.”

Being willing to make that sacrifice is something Mack preaches when he visits recruits. Step by step, he has made major strides in bringing players to Louisville. When he heads out on the recruiting trail, he often takes some important backup with him — his daughters. Lainee has been on recruiting visits for the past couple years, including spending four days at the Under Armour Challenge this summer. Hailee recently tagged along on a quick trip to Ireland to visit a recruit’s mother.

Having his daughters on recruiting trips serves two purposes. First, Mack is staying connected to the most important people in his life. Second, it demonstrates Mack is genuine when he promises recruits’ parents he is a family guy who will support their sons as if they were his own.

“When these kids commit to a university, they commit to being a part of our family,” Christi said.

Mack wants the family ties to extend to every single Louisville fan.

“Once you start to gain a trust with your own players, then it’s slowly going to go out into the community—whether it’s interacting with fans, whether it’s speaking at alumni events or season ticket-holder events,” he said.

This summer, the program hosted the Chris Mack Summer Camp, the first time in several years that university basketball camps with the men’s team were held. During the season’s first few home football tailgates, the Yum! Center practice facility had a full house when the basketball team held pick-up games in front of the fans. Players promoted the games on Twitter, where Mack himself is fairly active.

The Macks also want to give back. The Mack Family Foundation began as a nonprofit centered on serving and inspiring less fortunate children in the Cincinnati region. In Louisville they plan to continue their charitable efforts by focusing on childhood literacy.

“We want to continue to establish Coach Mack Corners that are dedicated to literacy in underfunded schools that need help here in Louisville,” Mack said. “A big part of it is teaching my kids — not just the kids that we’re trying to serve — but teaching my kids the importance of serving.”

After the preseason workout wraps, Mack’s two teams naturally merge on the court. Players and assistant coaches shoot baskets with Lainee and Hailee while Brayden races up and down the floor.

“I think the atmosphere has changed,” Sutton, a redshirt junior, said.
“You see him and his family, which is a great thing to see in a college coach these days. Sometimes you see his kids around practice, running around having fun. They embrace him as a college coach and a dad, which is cool.”

“These guys are like older brothers to my kids,” Christi said. “We want them to be around us. We want our girls to be up here rebounding for them in the gym. I think it’s great for the team, too, because a lot of these guys don’t get to see their family a lot. A lot of them have younger siblings that they don’t see. I think the guys enjoy it just as much as we do.”

Showing his players they can have basketball, a family and a career is important to Mack, who understands that despite their public personas as elite players, he is coaching young men who still have a lot of life ahead.

“What I want them to take advantage of is the opportunity they have because they are a Louisville basketball player — whether that’s friendships they gain or whether that’s alumni they meet who can help them well beyond when their basketball stops bouncing,” he said.

Q: Your assistant coach Luke Murray invites you over for a movie night. Which of his dad’s (Bill Murray) movies are you watching?

A: I would watch “Caddyshack” because Luke claims he’s never seen the movie and I find that hard to believe as a guy who probably has watched it I would say 300 times, 400 times, and knows every line in it.

Q: Which current Cardinal player do you trust to babysit your kids?

Q: What do the players think about your love for Kid Rock? Are you going to add some Kid Rock songs to the team’s hype music?

A: I’ve never asked the Louisville guys what they think of it because I probably know what the answer to that is. I’ll leave it up to my staff to do the hype music. It doesn’t help if I’m the only person hyped by Kid Rock.

Q: You versus your wife, oneon-one. Who wins?

A: I do. I’m better than her. She’d say I’m taller and have an unfair advantage, but yeah.

Editor’s note: The Mack family has some different opinions.

Christi: He’s crazy. He’s got bad knees. I can beat him full-court still.

Hailee: I agree with Mom. She would win running. But when Dad’s around, I don’t agree.

Lainee: Yeah, if he’s around then we say Dad would win on shots.