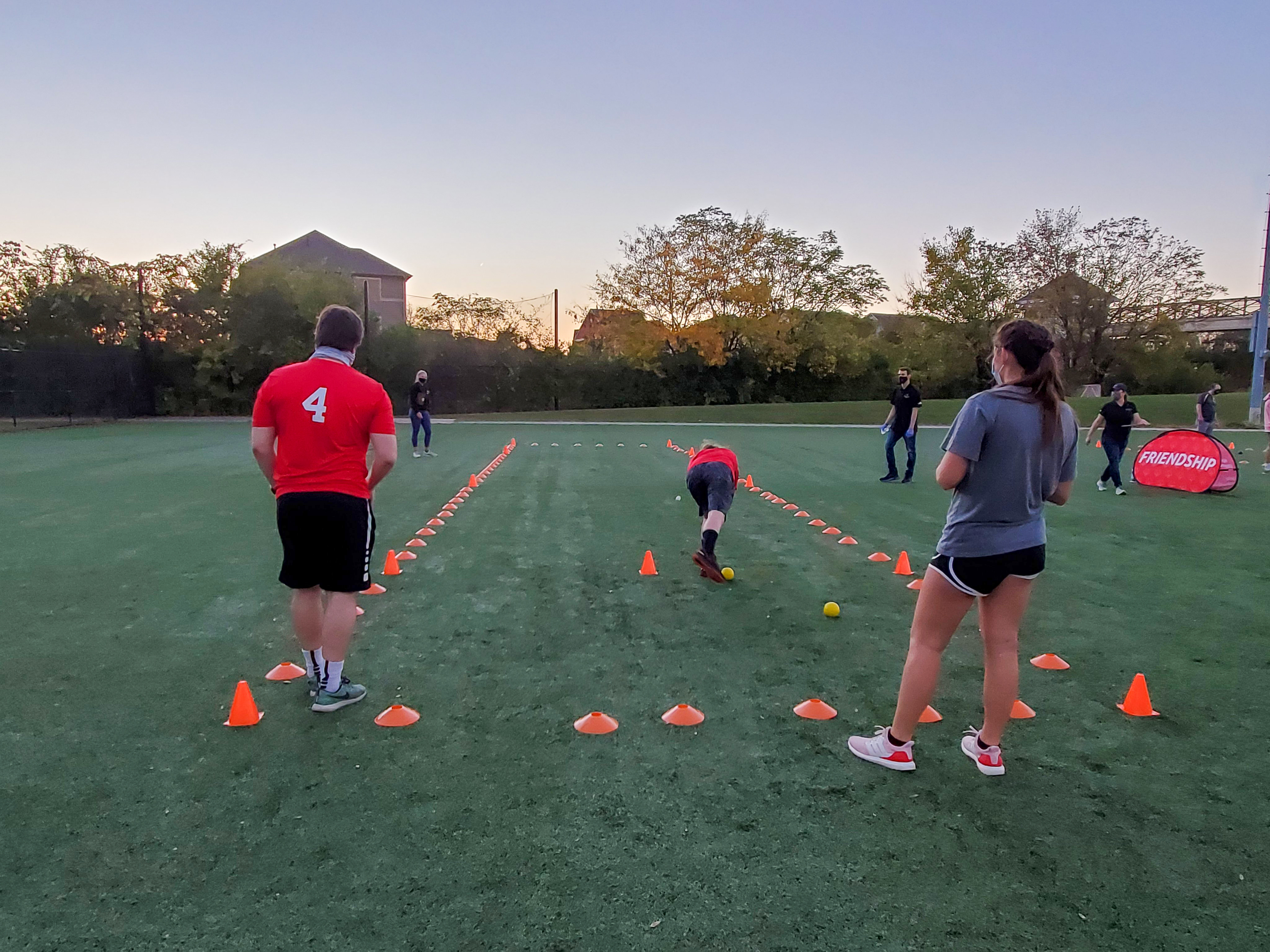 Special Olympics contests tend to end in big smiles, high-fives and medals. But those competitors aren’t the only ones finishing as winners.

The UofL students who volunteer as their teammate buddies in sports events, as well as the students and others who help with their required health checkups, learn valuable skills and appreciation that will carry over into their later lives. And the faculty and staff who guide them, along with Special Olympics Kentucky, continue to build an enduring alliance that benefits them all – those with and those without intellectual disabilities.

“The impact it has on our students at UofL competing with the Special Olympics athletes on the same teams – that’s the really cool part,” said Dale Ramsay ’82, intramural and recreational sports director. “This has opened their eyes, and I think they find out how much more they have in common than they do differences.”

From basketball to bocce

The relationship between Special Olympics Kentucky and UofL began more than three decades ago and is still going strong. What started as a statewide track and field event on Belknap Campus has evolved over time into competitions ranging from basketball to the newest, bocce.

Then-new UofL employee John Smith was approached in the late 1980s by Special Olympics representative Max Appel about hosting track and field for the athletes. Smith, now assistant director of intramural and recreational sports as well as Staff Senate chair, has seen and helped the program expand and change even as the campus has.

The involvement has mushroomed as Special Olympics developed its unified sports program that combines an equal number of athletes with intellectual disabilities with university students on sports teams for training and competition. The effort tries to pair athletes of comparable age.

When the Student Recreation Center opened on Belknap’s western edge, the basketball tournaments relocated there. And the bocce ball exhibition tournament – the first unified bocce team organized in Kentucky at the college level – occurred last fall in a socially distanced way on a turf field with four university students and four Special Olympians divided into unified pairs. Organizers called bocce an especially good addition because it was a more accessible sport.

“This was my first time playing any bocce,” said Dallas Derringer, a Special Olympics athlete. “I safely met new people while playing during a pandemic.”

“I have been fortunate to be a regular volunteer with Special Olympics Kentucky for around four years now, so it has been very rewarding to see the unified sports program expand to UofL,” said Corey Chitwood, a bioengineering graduate student. “It is important for me to interact with individuals with different backgrounds than my own. It is also important to make sure everyone in our community feels included to participate, so it was awesome the UofL could partner with SOKY for a unified event that was accessible to those at all ability levels.”

UofL was the first university that Special Olympics Kentucky paired up with to offer unified sports through an intramurals program, and it has become a springboard to establishing similar relationships with other universities in the state, according to Karen Michalak-Parsley ’14, the organization’s director of unified champion schools.

Special Olympics has a partnership with the National Intramural and Recreational Sports Administration to grow unified sports at the college level, she said. UofL has sent a unified basketball team to compete at its national meeting twice – even placing as the top U.S. team, second only to one from Canada, at its first invitation.

Student and staff involvement doesn’t end when the Special Olympics contests are over.
Volunteers hop into spirited fundraisers to support the more than 11,000 athletes statewide – braving a winter dip for the group’s Polar Plunge or competing in teams in the Plane Pull by tugging Boeing 757 airliners at UPS Worldport hub.

“I just can’t say enough about them going the extra mile to support Special Olympics Kentucky in every way, but also the unified sports. They participate in many ways and support us,” Michalak-Parsley said.

“Karen and I want to make this program bigger and bigger each year,” said Kat Halbleib ’17, ’19, who as assistant director of intramural sports coordinates the Special Olympics involvement now for UofL. “It’s a great thing for students and athletes on all fronts.”

In years unaffected by COVID-19, there is also a huge turnout of Special Olympians at Cardinal Stadium for MedFest, where medical teams provide hundreds of physicals and related health screenings, such as vision, dental and hearing, free of charge for those who’ll compete in various events.

Under Chandan’s leadership, medical students at UofL and other universities also learn more about caring for people with intellectual and development disabilities through the National Curriculum Initiative in Developmental Medicine. The five-year partnership between the American Academy of Developmental Medicine and Dentistry and Special Olympics International, with resources from a cooperative agreement funded by the Centers for Disease Control and Prevention, trains students about developmental medicine to better serve patients with such disabilities throughout their lifespan.

That work has spread from its intended 12 to now 20 schools that are enhancing their curriculums to include training that isn’t traditionally offered to medical students, said Chandan, the project director. At UofL, that means second-year students attend lectures and participate in small-group discussions with Special Olympics athletes to help the future physicians better understand their needs and how they would like to be treated. Fourth-year students can opt for an elective rotation at Lee Specialty Clinic, which serves adults with intellectual and developmental disabilities. The opportunities help the medical students get to know their patients as people.

“They want their physicians to talk directly to them,” rather than only to their caregivers, Chandan said. “If you are able to learn how to modify your communication style (toward patients), that’s a skill you need for patient care, period,” she said.

As more people with intellectual disabilities grow into adulthood and past their pediatric care, it’s more important for health providers to feel more comfortable and confident in treating them so their patients will seek and receive their needed medical attention. Chandan praised the School of Medicine’s support for the initiative and credits student interest for the growing involvement.

“They wouldn’t be advocating for more if they didn’t think it was important.”

In the beginning Chandan was motivated to get involved with Special Olympics because of her older brother, who has Down syndrome and who has participated in some events. Years later she is impressed by the university’s partnership on many levels with the organization.

“It’s a very tightknit relationship that has really grown, and it’s been awesome to see,” Chandan said.