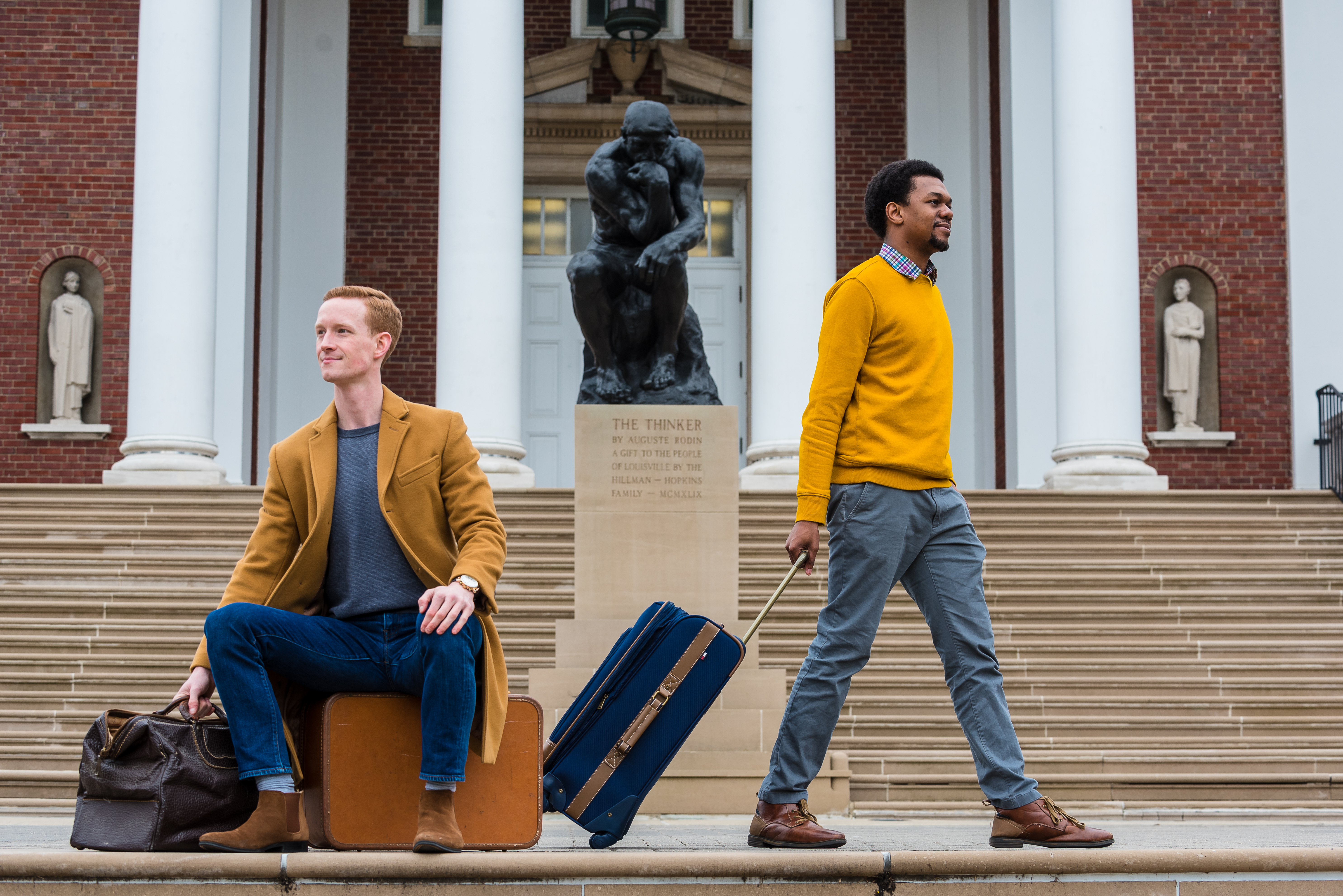 Like many high school graduates, Chris Bird ’18 stood at the precipice of adulthood, preparing to make the jump into college and asking himself, “What do I want to do and who do I want to be?”

Luckily for Bird, the Brown Fellows Program answered his call, promising a strong foundation on which to construct his dreams.

“The Brown Foundation trusted me at the age of 18 to do something that I believed in or was passionate about and gave me $6,000 to do it,” Bird said.

The Brown Fellows scholarship program is in its 10th year of success since its founding through the generosity of the James Graham Brown Foundation in 2009. The foundation wanted to provide opportunities to students at a public university and a private university, and selected UofL and Centre College to be its beneficiaries.

The program annually offers 10 UofL students and 10 Centre students the chance of a lifetime by providing them with financial aid to attend college and pursue their most ambitious dreams.

“Everybody gets to college supposedly knowing what they want to do, but not everyone knows what they can do,” said Andrew Grubb, senior academic coordinator for the Brown Fellows. “When the Brown Foundation comes in and tells you you can apply for $6,000 for two summers, when they take you to France, when they take you all over Kentucky, you find out a whole lot about what you can do and how big the world is — and you have the means to do whatever you want in it.”

Jessica Eaton ’13 was in the first class to complete the Brown Fellows Program. Eaton, now a University of Washington neurosurgery resident, easily recalls the influence that being a Brown Fellow had on her life.

“The way it started for us, our class in particular, was so different from anyone else’s experience,” Eaton said. “So the fact that it was so amazing and life-changing was really special. I always felt like I was really lucky because something amazing just fell into my lap.”

Eaton’s “amazing” began with a whirlwind trip to Panama, designed to let the fellows bond and develop leadership skills. Since then, the Brown Fellows have moved the international trip to the second year of the program, and expanded the team-building aspect into “Eudaimonia,” a leadership retreat and college introductory program where the fellows from UofL and Centre meet the summer before freshman year. Eudaimonia is a Greek philosophical principle centered on flourishing, or being the best version of one’s self.

During two weeks — one on each campus — the fellows participate in leadership training, community service and team-building activities. The goal is to turn the individual fellows into a close-knit group, which helps them broaden their perspectives across disciplines, solidify their support system throughout college and supplement their individual drives for success after graduation.

Eaton believes the relationships formed with her fellow Fellows is part of what made her who she is today.

“One of the most special things about Brown Fellows was how close you got to your peers,” she said. “I probably see Jackie Orth [’15], who was a couple classes below me, the most often. She recently happened to be running a half marathon in the Oregon wine country that I was at because my husband was running, and we spent the afternoon together wine-tasting and catching up.”

Along with finding lifelong friends and mentors, Eaton credits the Brown Fellow program’s focus on Eudaimonia — being her best self — with her accomplishments since graduation.

“I fully attribute those past experiences to my success in interviewing for positions in neurosurgery, and don’t think I would be where I am today — at one of the best neurosurgery residency programs in the country — without the opportunities that Brown Fellows gave me,” she said.

Learning in the global classroom

While a voyage to Panama is no longer the starting point for Brown Fellows, an international trip has remained a cornerstone of the program. The summer following freshman year, the fellows embark on an excursion where they learn to navigate a foreign nation, immerse themselves in a new culture and form bonds that could potentially last a lifetime.

Carmen Mitchell, a School of Public Health and Information Sciences doctoral student and class of 2014 fellow, recalls the impact of her class’s trip to Vietnam.

“Looking back, one of the most valuable things I got from Brown Fellows was the connections,” Mitchell said. “I hope we can work to continue to expand our alumni network so we can start becoming that network for the younger fellows.”

Kavonte Jones, a junior chemical engineering student, is one of those younger fellows. He visited Strasbourg, France with his peers in 2017. He had heard the international trip could be transformative, and that is exactly what he experienced.

During an outing to the Natzweiler-Struthof concentration camp near Strasbourg, Jones had what he calls his defining moment as a Brown Fellow. Standing in the scenic mountains that surround the World War II concentration camp, Jones was struck by the dichot-omy of the dark history of the site and the cheerful demeanors of his companions and other tourists.

“The day itself was gorgeous. If not for the history of the concentration camp, it would have been picture-worthy,” Jones said. “A lot of people were doing that [taking pictures] but it was the time spent walking through the camp that brought a somber mood. Even here, we sometimes look away and ignore the brutal reality that’s happened. I realized that sometimes you have to look a little deeper than what you’re offered or what you’re told.”

As Jones sets his sights on future aspirations, he takes care to remember the people who preceded him and opened doors for him to pursue his dreams today. That one-day visit in Strasbourg changed his entire outlook on life.

“I will always try to my best to see the situation that’s going on, to acknowledge what’s good and what’s wrong in the world. To just keep in mind the history of where I am and where I’ve been,” Jones said.

Standing on their own

While much of the Brown Fellows program allows the students to bond with their peers, a significant part of the program is the individual enrichment experience. Each Brown Fellow is provided a $6,000 stipend they can use for each of their upperclass summers to explore any interest they have. The enrichment experiences almost always involve travel, whether to work in an internship or geared toward their academic and service goals.

“These enrichment experiences are really the crown jewel of the program. This is what sets the Brown Fellows apart,” Grubb said. “Being able to get ahold of $6,000 and go do whatever you can draw up, that’s something really special.”

Jones used his first enrichment experience to volunteer in Peru, where he mapped canal systems. For his upcoming enrichment experience, he plans to travel to Mexico, stopping at the U.S.-Mexico border to gain a better understanding of the political situation there before visiting the Herradura tequila distillery to gain working experience that will help him prepare for a career in distilling.

Bird used his enrichment experience to further his academic goals. “I used it as a very purposeful exercise in expanding things that I was passionate about, but had neither the financial means nor the educational experience to get here on my own dime,” he said.

He spent his first project working at the White House Council on Environmental Quality in Washington, D.C. where he completed research on federal sustainability as an intern during the Obama administration. He was fascinated by the decisions made by the small group of professionals that would impact the nation’s policy regarding environmental protection.

The Council on Environmental Quality gig inspired him to spend a second summer in the Netherlands, studying sustainable building design. Thanks to that research project, he spent a third summer working at the U.S. Green Building Council developing LEED: the most widely used green building rating system in the world.

“I don’t think that opportunity came to me just because I was an engineer. It was definitely because of the opportunities from that Brown Fellows enrichment project,” he said.

Bird graduates in May and accepted a position as a structural engineer at Silman Structural Engineers, which works on the Smith-sonian museums as well as re-use and preservation projects. From his internships in Washington, D.C. and his research in the Neth-erlands, to his time serving as part of U.S. Green Building Council, Bird can trace his success back to each portion of the Brown Fellows program and the once-in-a-lifetime experiences they provided.

“I think back, had I gone to another school, I don’t see how I could have earned or received the trust that they purposefully give you,” Bird said. “That’s one of the big values of Brown Fellows — trust in your pursuit to do something that hasn’t been done before, that amplifies your experience as a student and that distinguishes the state of Kentucky and UofL.”