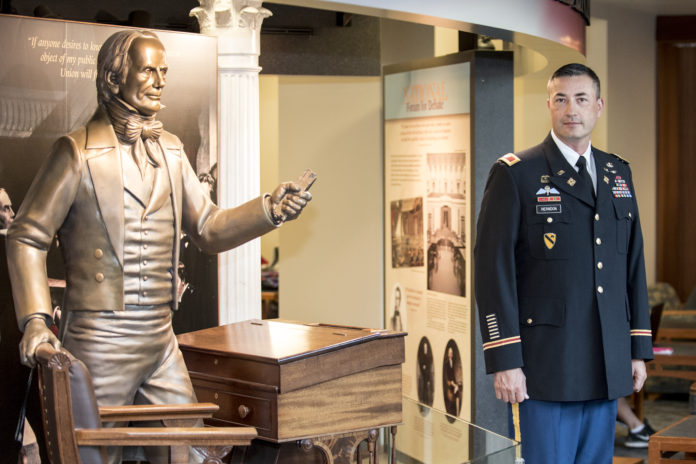 It’s not unusual to find maps in the McConnell Center. But the torn, well-used map hanging in Col. Archie S. Herndon Jr.’s office is more than an informative decoration.

Signed by the soldiers he served with during his first tour of Iraq, the map shows a refueling route between Kuwait and Baghdad that it was Herndon’s job to create. He returned two more times to Iraq and also served later in Afghanistan, for a total of 45 months served in the region.

The map represents “how the world has changed,” he said from his office in the center, where he described how difficult it was to procure a map at the time. Years later, in Afghanistan, maps popped up easily on computer displays.  “It amazes me,” said Herndon, whose many awards include a Bronze Star, a Meritorious Service Medal, the Army Commendation Medal, the Global War on Terror Expeditionary Medal and the Global War on Terror Service Medal.

Herndon’s U.S. Army journey has now brought him to the University of Louisville, where he is this year’s Army War College Fellow. His fall semester studies in criminal justice, international relations and talent acquisition reflect his broader interests in logistics and officer development.

In its third year at UofL, the Army War College Fellow program allows Army leaders to spend a year conducting research and outreach while auditing classes to sharpen their leadership skills and broaden their outlook as strategic thinkers. There are fellows in leading U.S. universities, U.S. government departments and government-funded agencies, think tanks and industry.

It is one of a series of programs put into place as part of UofL’s mission to “educate, employ and treat” members of the military, according to the Office of Military Initiatives and Partnerships.

The programs are successful: For the past six years, UofL has been named a “Military Friendly” university by G.I. Jobs magazine, and in 2015 was named “Best for Vets” by the Military Times newspaper group.

Military students (a category that includes active duty and veterans) made up 4 percent of the total student body enrolled in fall 2015, or 932 out of more than 22,000. The university keeps tabs on and improves services for those students through the military initiatives office and the Office of Military and Veteran Student Services.

Active duty military members attending UofL receive a special rate of $250 per credit hour, which ensures they can get a degree without paying out-of-pocket expenses. Other military-friendly programs and initiatives at UofL include:

UofL’s history is filled with efforts aimed at educating members of the United States military. In spring of 1943, when UofL was struggling with budget cuts and enrollment issues due to World War II, it was reinvigorated when it won a Navy officer training program called V-12.

The four barracks-style structures built to house the students became UofL’s  first dormitories. The V-12 program is even credited with making basketball a major UofL sport. The team was filled with high school basketball stars from all over the country, and the 1944-45 team set a new record at 16 wins, 3 losses.

Fast forward to 2016. Herndon, a logistics officer by training, said UofL was his first choice when he decided he wanted to be part of the Army War College Fellow program. The Texas native, who during his varied 22-year Army career has served at nearby Fort Knox, said he was attracted to the fellowship because of UofL’s reputation and because the city of Louisville is “a hidden gem.”